A little note before reading on. I said in my review of the Scarlet Pimpernel that I didn't think it was fair to grade Classics, other then to say if it was good or not, because they stood the test of time. So, from now on when I review a classic I will just say whether I recommend it or not. 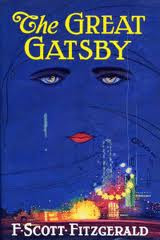 In 1922, F. Scott Fitzgerald announced his decision to write "somethingnew--something extraordinary and beautiful and simple and intricately patterned." That extraordinary, beautiful, intricately patterned, and above all, simple novel became The Great Gatsby, arguably Fitzgerald's finest work and certainly the book for which he is best known. A portrait of the Jazz Age in all of its decadence and excess, Gatsby captured the spirit of the author's generation and earned itself a permanent place in American mythology. Self-made, self-invented millionaire Jay Gatsby embodies some of Fitzgerald's--and his country's--most abiding obsessions: money, ambition, greed, and the promise of new beginnings. "Gatsby believed in the green light, the orgiastic future that year by year recedes before us. It eluded us then, but that's no matter--tomorrow we will run faster, stretch out our arms farther.... And one fine morning--" Gatsby's rise to glory and eventual fall from grace becomes a kind of cautionary tale about the American Dream.
It's also a love story, of sorts, the narrative of Gatsby's quixotic passion for Daisy Buchanan. The pair meet five years before the novel begins, when Daisy is a legendary young Louisville beauty and Gatsby an impoverished officer. They fall in love, but while Gatsby serves overseas, Daisy marries the brutal, bullying, but extremely rich Tom Buchanan. After the war, Gatsby devotes himself blindly to the pursuit of wealth by whatever means--and to the pursuit of Daisy, which amounts to the same thing. "Her voice is full of money," Gatsby says admiringly, in one of the novel's more famous descriptions. His millions made, Gatsby buys a mansion across Long Island Sound from Daisy's patrician East Egg address, throws lavish parties, and waits for her to appear. When she does, events unfold with all the tragic inevitability of a Greek drama, with detached, cynical neighbor Nick Carraway acting as chorus throughout. Spare, elegantly plotted, and written in crystalline prose, The Great Gatsby is as perfectly satisfying as the best kind of poem.

I read this book, because I wanted to read more classics and because of the movie. I just never wanted to pay 15$ for a book. Before I bought it I heard a lot of hype about how amazing it is and how its some people favorite book. So, I expected going into this book that it was going to be the best classic and maybe the best book I have read. While it is a very good book, it didn't really stand out to me. It was both beautiful and boring.

This book is basically about how unfair life can be and how staying in the past can destroy your life. The narrator, Nick, is recounting the summer he meet Jay Gatsby and the events that follow. I really liked how the affair and everything else was told through Nick's eye instead of the people doing the stuff. I found it really interesting to see the affairs and misdeeds of others through the eyes of a very honest man. The contrast between that was very interesting to read.

The writing in this book is some of the best I have ever read, its just so beautiful. It's able to captive and enchant you with just a few words. The words just flows so flawlessly that it sounds like poetry in some places. And this whole book is quoteable, I have more then twenty quotes from this book that are just amazing.

The bad thing about this book is that there isn't much of a plot. It got so boring in some places that the only thing that kept me going was the writing. The book isn't a plot based book is what I came up with, its more of thoughts about the unfairity of life and the rich. It was interesting to read, don't get me wrong, but it just wasn't fast paced.

The characters in this book was so beautifully flawed, they have the flaws that you can see normal people having so it makes you feel for the character  At the end of this book my heart just ached for Gatsby, he was such a fool, but you can see yourself doing exactly what he did and your heart just broke.

This book is a beautiful written book about how, no matter how hard you try, you can't repeat the past. And if you try it can destroy your life and leave you friendless. Even though it didn't have much of a plot, it was still interesting and the writing will captive you. So, I recommend this classic to everyone.


That's my review, come back tomorrow for Stacking the Shelves.