April 2:  Top Ten Characters I Would Crush On If I Were Also A Fictional Character (I know how y'all love your book boyfriends :P )

This is the hardest Top Ten I have ever did. It was torture to choose only ten. 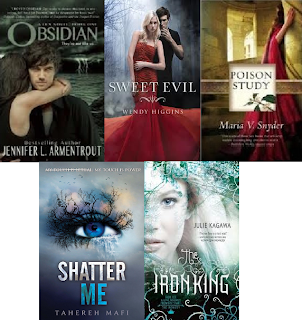 1. Daemon from The Lux series.
If you read Obsidian and tell me you didn't like Daemon I don't know what book you where reading, because it wasn't Obsidian. Daemon is all kinds of awesome (just don't tell him, his ego is big enough as it is) he is loyal, he can kick-butt and he is hot. What's not to like?

2. Kaiden from The Sweet Trilogy.
Kaiden is the definition of a bad boy, you can't read a couple of chapters with him in it and not get a crush on him.

3. Valek from the Study series.
Valek is the most mature guy on this list and he is just awesome. I also love how in most books the guy never wants the girl to get into any fights even though she can fight, because he doesn't want her hurt. I like how he has faith in her ability to fight and how even though he doesn't like it he lets her go into battle, because he has faith that she can win.

4. Warber & Adam The Shatter Me series.
I am counting this as one since there in the same book, that counts....right?

5. Ash & Puck The Iron Fey series.
Again, I'm counting these as one since there in the same series. And this was the only love triangle that I couldn't pick a side, I loved them both! 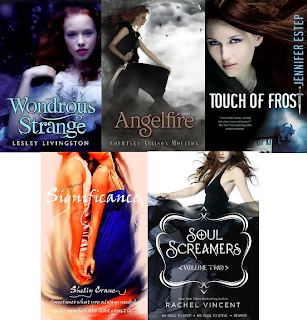 6. Sunny from the Wondrous Strange series.
Sunny my not be a bad boy, but he is one of the sweetest guys ever. I loved how he would follow Kelley anywhere, how he loved her so much that he would die for her.

7. Will from the Angelfire series.
To the people who read Angelfire, I don't need to explain this.

8. Logan from the Mythos series.
Again, I don't really need to explain this.

9. Caleb from the Significance series.
This series has the sweetest love story ever. Caleb is the sweetest person ever, he loves Maggie so much and she loves him so much.

10. Tod from the Soul Screamers series.
I will admit that for most of this series I was team Nash and it takes a lot from the other team to switch me over in the middle of the series, but Tod did it and more. It also helps that Nash is a grade A selfish jerk that doesn't deserve to even look at another girl again.

Perry from the Under the Never Sky Series.
Jackson from the Arcana Chronicles.
Beck from the Demon Trappers Daughter.