Ship that you wish had sailed but didn't?

This is such an easy one for me because almost all of my ships sailed. Tonks and Lupin, Harry and
Ginny, Hermione and Ron. So I only have one ship that never sailed which was Luna and Neville. They just seemed perfect for each other! It was only alluded at in the books and movies, but I shipped it so hard!


Who was your ship?
Happy reading 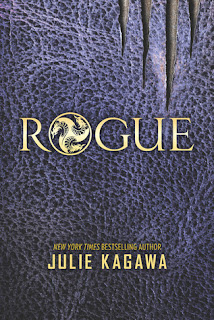 Deserter. Traitor. Rogue.Ember Hill left the dragon organization Talon to take her chances with rebel dragon Cobalt and his crew of rogues. But Ember can’t forget the sacrifice made for her by the human boy who could have killed her—Garret Xavier Sebastian, a soldier of the dragonslaying Order of St. George, the boy who saved her from a Talon assassin, knowing that by doing so, he’d signed his own death warrant. Determined to save Garret from execution, Ember must convince Cobalt to help her break into the Order’s headquarters. With assassins after them and Ember’s own brother helping Talon with the hunt, the rogues find an unexpected ally in Garret and a new perspective on the underground battle between Talon and St. George. A reckoning is brewing and the secrets hidden by both sides are shocking and deadly. Soon Ember must decide: Should she retreat to fight another day…or start an all-out war?

This series has been very up and down for me. There are so many aspects of not only this book, but this whole series that I love. The dragons and the lore in this book were freaking fantstic to read! The world and the action scenes are so exciting to read! However, there are so many other aspects that I didn't like.

Plot wise, this was a very solid sequel! The plot was very exciting to read! It was so fast-paced and action packed and I loved it! The pacing was also very good! The story advanced in the perfect paced! It was neither to fast nor slow, I was never whiplashed by the pace and I never got bored.

I love this world so much! I love the fact that there are dragons! I especially loved all the political intruige that we show inside Talon! It was a cool added aspect that added so much more to the world! It made it more real and it was so interesting! It also added a lot more suspense because Talon wants Ember and we don't know why. The question of what is so special about Ember was waeved throughout the story and it added thi sense of mystery.

Now the aspects that I didn't much like. The characters felt very distant and character development seemed very nonexistant. I really wanted to feel for Ember and everyone because when you care for the characters it makes the book so much better. However, I just couldn't. I don't know why but I didn't care. I didn't care about Ember and Garret or either of the love stories. I knew if someone died I really wouldn't care. This might be tied to my next point, which is none of the characters really grew or developed. The Ember at the end of the book was the same one from the beginning and the same goes for every single character. There was no growth of the characters and that might have helped the distance between me and the characters.

The next thing that I really didn't like was the sense of intitlement that every dragon had, even Ember. Throughout the whole book whichever dragon's POV we were reading from they would comment or think about how much better they were than humans. To clarify, I was not bothered by their attitude I was bothered by the waste of potential. You would think that this would be the perfect oppurtunity to grow the characters and help them down from their high horse. This did not happen. There were so many oppurtunites throughout this book to highlight humanity and how you don't need to be powerful to be bad-ass, but the author never took them! So many scenes I expected this happened but it never did and it angered me so much because now I had to deal with the dragon's attitude without any hope of them changing their minds.

Even with all its faults and the frusteration I felt I will continue this series. The world and plot has my heart! I loved the world and setting and I can't wait to read more of the interworkings of Talon!