Review: Memoirs of a Teenage Amnesiac by Gabrielle Zevin. 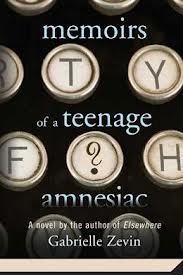 I've heard some good things about this book. I was on the fence whether or not to read it, because contemporaries are just not my thing. Then I thought of how the contemporaries I do love were me taking a chance on them. So, I took a chance on this one, hopeing that it will be good. The end result wasn't very good. This book was such a disappointment.

First off I want to say that this book as a whole was decent. It was written well, the characters where nice, the story was very good. However, it's getting 2 Butterflies, because it wasn't my kind of book.  There was also a few problems with the book, but why I am giving it such a low rating is the simple fact that is wasn't my kind of book.

What made it not my kind of book was the plot. I picked this book up, because it sounded interesting. And I took a chance on it, because really emotional books just aren't really my thing. I finally found out why this is. Because most of the emotional books I read are just to vague. The author focuses more on the emotions aspects then the physical aspects of people. If that makes sense. I started out really loving this book, because this book wasn't like that. There was emotion, but not to much emotion. And the plot was good for a while.

You are probably thinking why did I give it such a low rating if it started out great. That is because of in the middle of the book the plot just stopped. The beginning of the plot was where Naomi was learning about her life that she can't remember. And the author did that well, you where engaged in the story. Then the plot slowed to a crawl. She was falling for James and she said "screw the past, I am who I am" I was fine with it, but that cause the plot to stop for a while. It was just her living her life and it picked back up after a while (a long while) and it was interesting, but not enough to save it from that middle at least for me. I just don't like books where the main characters just live their lives. It would have been fine if she was going through some emotional things, but by then she basically resolved all of those.

Also, I would have been fine with the middle, because I really like love stories, but the way this was written prevented me from connecting with their relationship. Actually it prevented me from connecting with anything. This book was written like Naomi was sitting right by you and told you this story of a part of her life. the story was in past tense and Naomi (Older Naomi) was narrating it. Books like that are fine, but I don't feel like I'm in the story. I felt so distant with this whole book. Whenever Naomi was feeling sad, angry, or whatever I didn't feel it. I felt nothing.  Most of you know that I need to feel connected to either the characters or the plot, but I felt nether in this book.

The only thing I really loved in this book was the relationships in it. I liked how it wasn't just falling in love it was also moving on. I can't really say much more without spoilers, but I just like how the author went on another more realistic path than most love stories goes on.

One last thing I don't like.....vague the ending was. It didn't really end anything. I feel in stand-alones the ending has to wrap up at least most of the book. And this one didn't. It felt like an end of a chapter then ans ending for a book. I need closure in the ending of books and this ending didn't really have any of that.

I would recommend this book to people who like really slow books about peoples life and don't mind not feeling super close to the characters. However, if you aren't both of those, then I would tell you to skip this book, because while it is written well, it will disappoint.