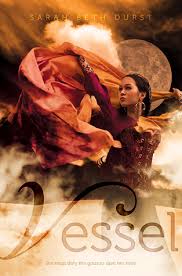 Liyana has trained her entire life to be the vessel of a goddess. She will dance and summon her tribe's deity, who will inhabit Liyana's body and use magic to bring rain to the desert. But when the dance ends, Liyana is still there. Her tribe is furious--and sure that it is Liyana's fault. Abandoned by her tribe, Liyana expects to die in the desert. Until a boy walks out of the dust in search of her.Korbyn is a god inside his vessel, and a trickster god at that. He tells Liyana that five other gods are missing, and they set off across the desert in search of the other vessels. The desert tribes cannot survive without the magic of their gods. But the journey is dangerous, even with a god’s help. And not everyone is willing to believe the trickster god’s tale.The closer she grows to Korbyn, the less Liyana wants to disappear to make way for her goddess. But she has no choice--she must die for her tribe to live. Unless a trickster god can help her to trick fate--or a human girl can muster some magic of her own

This book is like a rollercoaster. It has it's really high aspects and it has it's very low aspects. When I was finished reading this book I had so many mixed emotions. I loved the plot, and I hated the characters. And while Sarah Beth Durst wrote a very enjoyable book, I couldn't give it more then 3 Butterflies because of the beginning.

The beginning of this book, to put it simply, was bad. The plot wasn't really solid, it just floated around. I could understand this, because in most books the beginning is just to introduce the characters and such. Then the plot slowly seeps in. And that is what happened with this book. However, what I really didn't like was for the first half of this book I hated the characters. Hated them. I didn't like how they just accepted the fact that they where going to die. I can understand why they would do it, but not how they don't question it and not have some ill feelings toward the gods for making them die. Everyone says its fine, because then you go into the dreaming (their afterlife), but if that place is so good why do the gods want to get out of there and into the real world? No one asked this question! Gar!! They just annoyed me.

However, the characters got better after the first half of the book, I don't know if it's because I learned to tolerate them, or because of character development, but whatever it was it made the characters better so i'm happy. Also, the characters didn't seem real to me, they were a little two dimensional. Everything that was on the surface is all that you got,there wasn't anything deeper in them. However, that aspect of the also withered away as the story progressed.

I was so annoyed with the characters in the beginning that the only thing that kept me going was the premise of the plot. Like I said, the plot took a while to become a solid plot, but even before that something about the authors writing was enchanting enough to keep me interested until the plot did get going. And when the plot got going it got going. It was super fast, it had mystery, suspense, lots of action and I really loved where it was going, I just loved this plot! However, I was kind of confused, because the tag line for this book is "She'll have to defy the gods in order to save her clan" and that didn't come into play until the very last part of the book. So, that confused me a little.

Also, a little side note I am really glad that there was a love triangle in this book, because her relationship with Korbyn was built upon the fact that he was a god and he was hot. It developed me than that, but it was built upon that and I really didn't like it. So, I was really glad when the second guy came into the picture.

All in all, I really enjoyed reading this book, the plot overshadowed the characters and I really liked how the author ended it. I would recommend it to any fantasy fan, but I would also warn them that the characters aren't the best. And if you can get through the first half they will get better and the book will be very enjoyable and good.

Recommend if you like:  Fantasy, books with gods in them, and Sarah Beth Durst.