Review: See Me by Wendy Higgins 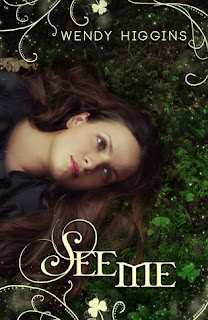 While most seventeen-year-old American girls would refuse to let their parents marry them off to a stranger, Robyn Mason dreams of the mysterious McKale in Ireland, wondering how he’ll look and imagining his cute Irish accent. Prearranged bindings are common for magical families like her own, however when she travels to the whimsical Emerald Isle she discovers there’s more to her betrothal and McKale’s clan than she was led to believe. What starts as an obligatory pairing between Robyn and McKale morphs over time into something they both need. But one giant obstacle stands in the way of their budding romance: a seductive and deadly Fae princess accustomed to getting what she wants—and what she wants is McKale as her plaything. Love, desire, and jealousies collide as Robyn’s family and McKale’s clan must work together to outsmart the powerful Faeries and preserve the only hope left for their people.

Wendy Higgins has written one of my favorite series, the Sweet series. I love those books so much but I had yet to read any of her other books. So, of course, I just had to read this book! I went into this book with pretty high expectations and I think that contributed to the final rating of this book. I liked this book, it was enjoyable and I really enjoyed reading about the world and Ireland and the system of the Faeries. There were a few things that weren't as great as I was expecting them to be. Also, I feel the need to say that as time passes I liked this book less and less. The bad things keep sticking in my mind and I'm forgetting the things I liked.

First off, I enjoyed the plot and the story. I liked the storyline that the main character needs to marry this man for her family's safety. I did enjoy the romance, even though it was slightly confusing. It started off as a very cliche insta-love story but then it did an 180 and they refused to talk to one another. It was off-putting. And then they fell back in love with one another in less than a month.

I didn't really like the characters. They were okay and were kind of enjoyable to read at times. It just felt like a lot of potential was wasted. The characters weren't focused on enough. Also, I found the main character very shallow at times. She had a panic attack and freaked out when she learned that the clan she was marrying into were leprechauns. I get that she was self-conscious about her height, but damn her priorities were all screwed up. I wouldn't be surprised or even put off if she freaked out about getting married but she didn't. She was all right marrying the guy, but when she learned that he might be short that's when she couldn't handle it. I was put off my her shallowness and it was never developed throughout the story. It wasn't part of her character arc at all, it was just there. Actually, no one really went through any sort of character development.

Also, whats the point of making a book about leprechauns when the main love interest is magically the only one that's tall. It was redundant and took away from the setting of the world. One last thing, I didn't like how the clan was so sexist and everyone just accepted it. They didn't like women in the shoe workshop and women only worked as cooks, maids, etc. And everyone just accepted this! They were mad and all, but they never addressed it. It was more like "Yah, it's there and we're not happy about it, but since it's their tradition and way of thinking it's all right". I didn't like this.

All in all, this book was an okay read. The romance was fun to read about and I really liked the two characters together. However, the plot wasn't really there, it was just about the romance, which is fine but there was a lot of potential there that wasn't really used. The same thing can be said for the characters. They were nice and not to bad, but they weren't really fleshed out.