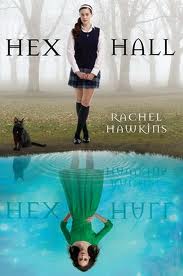 Three years ago, Sophie Mercer discovered that she was a witch. It's gotten her into a few scrapes. Her non-gifted mother has been as supportive as possible, consulting Sophie's estranged father--an elusive European warlock--only when necessary. But when Sophie attracts too much human attention for a prom-night spell gone horribly wrong, it's her dad who decides her punishment: exile to Hex Hall, an isolated reform school for wayward Prodigium, a.k.a. witches, faeries, and shapeshifters.

By the end of her first day among fellow freak-teens, Sophie has quite a scorecard: three powerful enemies who look like supermodels, a futile crush on a gorgeous warlock, a creepy tagalong ghost, and a new roommate who happens to be the most hated person and only vampire student on campus. Worse, Sophie soon learns that a mysterious predator has been attacking students, and her only friend is the number-one suspect.
As a series of blood-curdling mysteries starts to converge, Sophie prepares for the biggest threat of all: an ancient secret society determined to destroy all Prodigium, especially her.

I read this a long time ago and fell in love with it!! I love everything about it. It's humor, the plot, the characters, the writing and just about anything else you can think of. It's just a fun, enjoyable, lovable book. It's a book that will catch your attention and keep it. It will get you emotionally involved with it and then it will tear out you heart with the shock at the end. It's just a great book!!!

Before I go any farther I want to say that this book does have it flaws. The plot, while its very engaging  is not the most epic plot out there. The characters, while they where fun and well written, they weren't the most memorable. The writing, while fun, doesn't blow you away, but I didn't care about any of that. This book made me fall in love with it despite it's flaws. It's like an Ewok (from Star Wars) their the most adorable thing out there. And you know there not the best warriors, but you don't care, because their just so adorable. This book was just like that.

The plot, like I said up there wasn't the best I have ever read, but non-the less it is still fun, enjoyable, and enchanting. It is a fast paced book, but not to fast where your head starts spinning. It also had some twists and turns that I didn't see coming (that ending). Like I said before, you are engaged in this plot, you are invested in the characters life, any book with that in it is so much better.

Like I said up there, the characters weren't the most memorable, except Sophie & Archer. Sophie is the snark queen. She is what made the humor in this book. You laugh about three times a chapter, because of her. She is also a character that you can't help but admire, she just has all of these qualities that makes her an awesome person. I just loved her!

One of the things I really liked about this was how the author wrote all of the creatures. Somethings where cliche, but she added her own things to them. Like how the vampires communicate and the shifters. I also liked how the werewolves were werewolves. They were the Hollywood version that we all grew up with, instead of just wolves.

The last thing I want to talk about is the relationship between Sophie and Archer. I loved the exchanges they had, they were so fun to read. They also had something that very few fictional couples have and that is chemistry. You could just feel their chemistry on the pages. It seems like very few fictional characters have this. It made reading this book so much better. I also liked how, even though Sophie was attracted to Archer they fell in love over time. I love books that do that.

I would recommend this book to everybody. It is such a great book! and while it does have some flaws it will make you look over them with it's lovable quality.

Recommend if you like: Academy books, mythical creatures, and books with witches.