Warning: Do not read any farther if you haven't read the rest of the series, Half-Blood, Pure, and Deity. 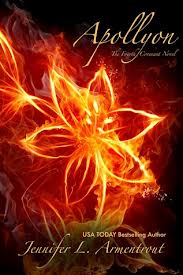 Fate isn’t something to mess with… and now, neither is Alex.Alex has always feared two things: losing herself in the Awakening and being placed on the Elixir. But love has always been stronger than Fate, and Aiden St. Delphi is willing to make war on the gods—and Alex herself—to bring her back.The gods have killed thousands and could destroy entire cities in their quest to stop Seth from taking Alex’s power and becoming the all-powerful God Killer. But breaking Alex’s connection to Seth isn’t the only problem. There are a few pesky little loopholes in the whole “an Apollyon can’t be killed” theory, and the only person who might know how to stop the destruction has been dead for centuries.Finding their way past the barriers that guard the Underworld, searching for one soul among countless millions, and then somehow returning will be hard enough. Alex might be able to keep Seth from becoming the God Killer… or she might become the God Killer herself.

So, Deity left off on a huge cliff-hanger and I, like most, really wanted to read the next one (this one). So, when I saw it in the book store a week early I was extremely excited. I started reading it as soon as I got home and I loved it!! However, it wasn't my favorite of the series, but that doesn't mean it didn't put me on a roller coaster of emotions and captivated me from the first page up until the last letter.

What I love most about this series is that unlike other books that have Greek Mythology in it and the plot it either about a Titan getting lose and chaos or a god getting lose of its cage and chaos  Either way there is someone getting lose. I like how Jennifer L. Armentrout doesn't do that. These books have so much more in their plot, this book's plot was so much more then just stopping a war. It was about love, sacrifice, death,  moving forward, and growing as a person. I was really amazed about that and it made me fall in love with this series.

What I also really liked about this book was how Seth wasn't the bad guy in this book. He was one of the bad guys, but I liked how the author made it a point to show that he was being used and he wasn't in his right state of mind. That brought so much more depth into the book. It showed how everything wasn't just black and white, that there is grays in life.

Another really great thing in this book that is just a minor detail, it was the interaction between Aiden and Alex. There is a lot of bigger things happening in the world then the relationship between a half and a pure, which allows Alex and Aiden to be open with their relationship. And they can interact more with each other in public, they can share glances, touches, they can hold hands, they can hold each other for comfort without worrying about it. The author wrote that aspect so well that it made their relationship so much sweeter and romantic. I just fell in love with that aspect of the book, because I've been a die hard Aiden fan since the first book.

The best thing in this book was how you can see how far Alex has come. Her character development in this book is so brilliant. You can see how much she's grown throughout this whole series. She still is snarky, but she more wise and mature then the first book.

The thing that made this book get 4,5 Butterflies instead of 5 is that in my mind there wasn't enough action in it. It just didn't seem to have enough action in it for a book that has  war in it. The plot was fast and captivating, but it still didn't have as much action in it as I would have wanted. That also leads to my next point, the ending in this book felt choppy. I hate saying that, because I love Jennifer L. Armentrout, but it's the truth. It was suppose to be a cliff-hanger, but it felt like it just stopped in the middle of a chapter. And that ending fight scene.....I don't think I would even call that a fight scene, it was more of a beating then anything else.

Overall, this is a heart-pounding, fantastic book that had so many outstanding aspects to it. And it was simply a extraordinary installment to a brilliant series. Although it did have its down sides, but I still fell in love with it.

Side note; I would advise people to read the novella Elixir before reading this, because in this book it does reverence events that happen in Elixir. So, you would get the full reading experience for this book if you read Elixir first.


4.5 Butterflies﻿
Beautiful, this is a really great book!

Reccomended if you like: Jennifer L. Armentrout, Greek Mythology, and the Covenant series.


That's my review, Hope you read this series, because its great!
Happy reading