Review: Girl of Fire and Thorns by Rae Carson 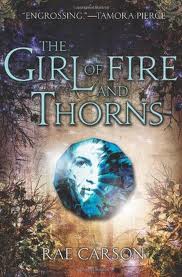 Once a century, one person is chosen for greatness.
Elisa is the chosen one.
But she is also the younger of two princesses, the one who has never done anything remarkable. She can't see how she ever will.
Now, on her sixteenth birthday, she has become the secret wife of a handsome and worldly king—a king whose country is in turmoil. A king who needs the chosen one, not a failure of a princess.
And he's not the only one who seeks her. Savage enemies seething with dark magic are hunting her. A daring, determined revolutionary thinks she could be his people's savior. And he looks at her in a way that no man has ever looked at her before. Soon it is not just her life, but her very heart that is at stake.
Elisa could be everything to those who need her most. If the prophecy is fulfilled. If she finds the power deep within herself. If she doesn’t die young.
Most of the chosen do.

So, I started this book a while back and put it down, because I wasn't in the mood for a fantasy. And since then its just been sitting on my self un-read. So I picked it up for the TBR reading challenge and I am really glad that I did. Even though the beginning of this book was a little slow after a while it got better and better and in the end I was completely in love with this book.

Like I said the first part of this book was boring. When I say first part I don't mean first half, I mean that my copy has three parts in it. And about 1/3 the way through the first parted ended and the second began. The first part was boring, because it didn't have much plot in it, I felt like it just introduced characters and layed out background info. Also I got annoyed with the main character, because everyone treated her like a child, never telling her what's going on just saying she doesn't need to worry. No one even answered her question on why she's getting married. I got annoyed with her, because while she realized that she never did anything about it.

The only reason I kept reading was the book kept giving hints that the plot was going to pick up and, because it was really great to read how Elisa's character changed over time. The character development in this book was so well done and so great that it was one of the best parts in this book. I usually don't talk about character development in reviews, because I never read a book where it impressed me. It not only impressed me in this book, it amazed me on how well it was written. You could see throughout this whole how the main character Elisa changed from Naive child to fierce queen that you don't want to mess with.

When part two started the book got so much better. The plot got more depth and so many twists and turns, the characters got better and more characters where introduced, and there was mystery, suspense, everything. The plot still wasn't fast in every part of the book, but that made it feel more realistic, because not every adventure has action at every turn. Another reason how this plot felt real, was how the author made characters die. Characters that you fell in love with and admired and when they died it felt like a knife in the heart. I really loved that the author did that, because there is war and in war people die. And it let me feel closer to the characters, because we both morn the same character.

Speaking of realistic, the characters in this book felt so real to me. They weren't perfect or had all these amazing quality's to them, but that made them feel like real people. The main character was amazing to me, because not only was she well written, she was an average person that wasn't all that brave, but she made herself brave 'cause she had to. And I really admired that in her.

All in all, the first part of this book was boring, but if you get past that you will find a book that amazes you, captivates you, and makes you love it. I can't wait to read the next book to see what happens. I would recommend this book to any fantasy lover.

4.5 Butterflies
Beautiful, this is a great book.

Recommended if you like: Fantasy, character development, and historic fiction.


That's my review, I hope you pick this up, because it's really great.
Happy reading.