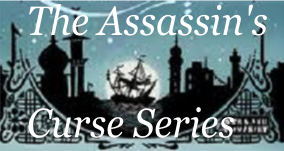 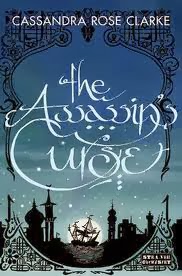 Book one~ The Assassin's Curse by Cassandra Rose Clarke
Review.

Ananna of the Tanarau abandons ship when her parents try to marry her off to another pirate clan. But that only prompts the scorned clan to send an assassin after her. When Ananna faces him down one night, armed with magic she doesn't really know how to use, she accidentally activates a curse binding them together.
To break the spell, Ananna and the assassin must complete three impossible tasks--all while grappling with evil wizards, floating islands, haughty manticores, runaway nobility, strange magic...and the growing romantic tension between them.

Skip this if you haven't read The Assassin's Curse. The series review doesn't have any spoilers but this summary does contain spoilers for the first one. 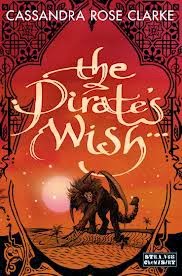 After setting out to break the curse that binds them together, the pirate Ananna and the assassin Naji find themselves stranded on an enchanted island in the north with nothing but a sword and their wits. But Naji has unseen enemies, and Ananna must face the wrath of the Pirate Confederation.
Together, they must travel afar, defeat their foes and break the mother of all curses. With all this going on, falling in love would be such a bad idea... All of this and much, much more await, in the swashbuckling sequel to The Assassin's Curse.

Book 1:
So, I had a lot of expectations for this one. I thought it was going to be amazing, the concept sure sounded like it, but I was a little disappointed. Very few things happened in a lot of pages, which was frustrating to read. It also felt to much like a set up. It felt like it had less of its own plot and more like it was setting up book two's plot. Which really hindered and took away from this book.

However, even with those problems it was still a very enjoyable book. I loved the characters! I thought that they felt very realistic and lovable. I was also swept up in the world. There wasn't as much world building that I would have liked, but it was still a really cool world. I really liked the pirates aspect to the world; it gave the whole book a sense of adventure and fairy-taleness to it.  The plot was also very interesting. Even though the plot did feel more like it was just made to set up for the second, it was still really fun to read!


Book 2:
This one was much better!! I felt like all of the problems I had with the first went away with this one.
Since this was the second one the whole emptiness of the plot in the first one wasn't there. The first one's plot set up for this one and since this one doesn't have any other books to set up for it had more filling to the plot. The plot itself was really enjoyable and amazing! It was really fun to read and the pages flew through my hands.

The one and only problem I had with this one is that the writing took away from the story again. Throughout this book very few things happened in a lot of pages. Which is really annoying to read.

Overall:
This was an enjoyable series. There were some problems throughout the series, some of which get fixed in the second one, but overall I really liked this series. I thought it was full of action and great, lovable  characters. I also really liked and shipped Ananna's and Naji's relationship. I thought it was really cute and fun to read. I liked how the romance in this was really subtle in the first one but flourished in the second one, which made it feel really realistic.

I would recommend it to any fantasy/paranormal lover or to anyone who wants to read an adventure.