Sorry about the picture, blogger is being weird and this is the best one I could put up. 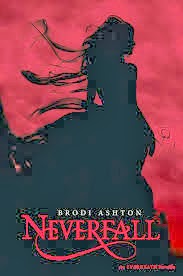 A thrilling new novella from the author of the Everneath series!

Jack is trapped for eternity in the Tunnels while Nikki has managed to evade Cole's grasp . . . for now. But Cole is more desperate than ever to find answers about Nikki, his best chance for taking over the throne of the underworld. How did she survive the Feed? Can Cole find another Forfeit like her who can survive it too?

Cole's quest leads him to the other side of the world, to a mysterious, dangerous society known as the Delphinians, whose price for information might be higher than Cole can pay—a price that could destroy Nikki. But when Cole attempts to steal the answers instead, his mission ends in disaster. Faced with centuries in a Delphinian dungeon, Cole is confronted with questions he's been too scared to ask himself: Is he really obsessed with the throne—or is he obsessed with Nikki? And can she really give him a new beginning as the Everneath's king . . . or will she instead bring about his tragic end?

I read the second book in this series before I read this. With what happened at the end of Everbound I just needed to get inside Cole's head. I was hoping Brodi Ashton would release a novella and then I figured at that, hey she already did. So of course I got it and read it as soon as I could and I got to say this was one of my favorite novellas. It was so good!!!

This novella gave me everything I wanted from it!! It had a plot line that divers from the rest of the series, but is still connect to the series. I got to see inside Cole's head, which was an interesting experience. And finally, I got to see more of the Everneath, which was freaking amazing!

One of the best parts of this novella was being inside Cole's head and saying what he thinks of things. Not only in the present, but we also get flashbacks to when he first meets Nikki. And it was really interesting to see what he thought of certain things and how his thought process is. It was also really eye opening to see things from his perspective. At what happened in the end of the second book I thought for sure he didn't love Nikki, but reading this you see that he does. That really made the plot and characters even more complex for me.

The author did a great job writing from his perspectives. Because you can tell that he doesn't have humanity, at all. He doesn't feel remorse, barely any guilt, he basically doesn't feel any emotions. And the author did a great job at writing that, but also at the same time making him into a complex character. You have to read it to understand how that works, but Cole got so much depth in this book, it was amazing!!!

We also get to see and learn more about the Everneath and some of it's history, which was pretty awesome to read about. And the plot was really captivating, I actually wish this book was longer so the plot could have went on.

Overall this book was amazing!! It was one of the best novellas I have read. It was so well written and it was great being inside Cole's head. Basically it was amazing and it made me even more excited for the next book, Evertrue, to release.