Top Ten Tuesday REWIND! (Pick from previous topics that you want to do again or may have missed)
Favorite Kick-Ass Heroines

Alex from the Covenant series by Jennifer L. Armentrout
She is one of the best fighters I've  read. She can kick anyone's butt without breaking a sweat. She is also sassy and refuses to take crap from anyone.

Allison from the Blood of Eden series by Julie Kagawa
Allison is a freaking amazing fighter and she is so kick-ass with her cool sword. It also helps how amazing Julie Kagawa can write fight scenes. In every fight scene in these books it's like you can vividly see the fight happening in your minds eye and its so freaking amazing to read!!

Hermione from the Harry Potter series by . K Rowling
So she might not be the best fighter but she did fight in a huge war and she was willing to sacrifice everything to help Harry. Not only Harry, she would be willing to do anything for people she loves. She even wiped her parents minds so they didn't have any memories of her so they would be safe. I mean, if that doesn't make her an amazing person and character I don't no what does.

Juliette from the Shatter Me Series by Tahereh Mafi
Juliette may be a whinny, selfish brat sometimes, but overall she is a kick-ass character. She has these amazing powers and she knows how use them.

Gin from the Elemental Assassin series by Jennifer Estep
Gin not only a kick-ass character but also a kick-ass assassin. I love reading these books because Gin is an amazing fighter but also refuses to let anything stop her and don't even think about threatening people she loves.

Gwen from the Mythos Academy series by Jennifer Estep
Gwen is just an amazing character altogether. She can fight, but she is also a great friend, very selfless, and a very smart and clever.

Yelena from the Study series by Maria V. Snyder
I love Yelena!! She is one of my all time favorite characters. She is tough and selfless and stubborn and a great fighter. She also refuses to let something intimidate her. If someone stronger them her threatens her she won't even blink an eye before throwing herself at him. And on top of that she will probably win the fight. She also gives her all to a challenge. It's all or nothing with her.

Katy from the Lux series by Jennifer L. Armentrout
Katy isn't as kick-ass as some of the characters on this list, but she is still great. What I like about her is that she feels like a normal person, not a chosen one or someone damaged. She acts and thinks like a normal girl, which I really appreciate. 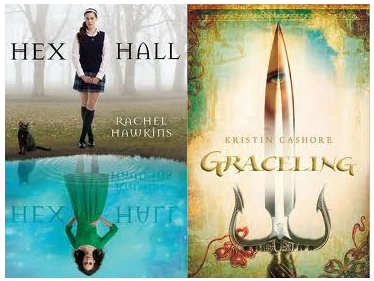 Sophie from the Hex Hall series by Rachel Hawkins
Sophie has everything a great heroine needs. She's a great fighter, she won't let somebody get hurt if she can help it, and she is hilarious. She is the sass queen of all the books. She lives on sarcasm.

Katsa from the Graceling Realm series by Kristin Cashore
Katsa has some flaws, but she is still an amazing character. She won't let anything stand in her way, if someone near to her heart gets hurt she will be there for them. And she will fight to the death to help someone she feels if being wronged.