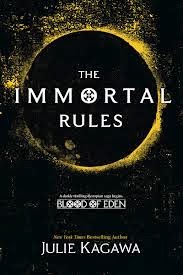 To survive in a ruined world, she must embrace the darkness…
Allison Sekemoto survives in the Fringe, the outermost circle of a walled-in city. By day, she and her crew scavenge for food. By night, any one of them could be eaten. Some days, all that drives Allie is her hatred of them—the vampires who keep humans as blood cattle. Until the night Allie herself dies and becomes one of the monsters.
Forced to flee her city, Allie must pass for human as she joins a ragged group of pilgrims seeking a legend—a place that might have a cure for the disease that killed off most of civilization and created the rabids, the bloodthirsty creatures who threaten human and vampire alike. And soon Allie will have to decide what and who is worth dying for…again.
Enter Julie Kagawa's dark and twisted world as an unforgettable journey begins.

This is so much hype surrounding this book. People who've read it say it's just amazing and awesome. So, naturally it was on my book radar, because not only is it written by Julie Kagawa who wrote some of my favorite books, but because people sing it's praise. However, I wasn't in the biggest hurry to read it since I was tired of vampires. I was tired of books about them, TV shows about them, I was just tired of them. But finally I told myself I was going to read it and boy am I glad I did. This book was everything people say it is with a bag of chips! It. Blew. Me. Away. I loved it!!

This book starts with Allison trying to find food for herself and going around the Fringe. And something that surprised me about this book is she doesn't turn into a vampire right away. She gets turned about 70 pages in and often this would have annoyed me, "like just get on with the part of the plot where I don't know whats going to happen, I know shes going to turn into a vampire". However, Julie Kagawa took this time not to drag out the plot, but to set up the world and the history and the characters. And she did it in such a way where there wasn't any info dumps, which is short of a miracle, because so many authors would have got that wrong. Also, this is one of my favorite post-apocalyptic worlds I have read!

The plot in this book blew me away!!! This was the best aspect of this book. It was so amazing!! It was fast paced, it was dark and haunting, it hypnotizes you and before you know it you're to deep to get out. It was just phenomenal!! I loved every second of it!

The vampire aspect of this book was great!! Although, in the beginning I felt like it was all done before, like it was just a mash up of things in different books and movies. However, it quickly became apparent that, that wasn't the cause, because it was executed in such a way that its different than anything I've read or watched.
Julie Kagawa wrote in such a way that amazes me. You have to read it to really understand this, but the writing was just outstanding!!

The characters in this book where amazing!!! I felt that they all had depth, even the side-side characters. Of course my favorite character was Allison. She is one of the most kick-butt character I have read! I knew she was going to be right when she picked up those twin swords. I loved how she wants to be a good person, she doesn't want to drink from anybody, but she realizes she has to and she adopts to that while at the same time she still holds on to her humanity. I just loved her for how strong she had to be to do that.

I think what really made the book memorable wasn't the plot or the writing or even the characters. What I think really made this book was the themes the author weaved into it. Themes of humanity and power that are flawlessly entwined into this plot. Making it both a fast past, exciting book and also a thought provoking read. I've never encountered a book like this before, but it was amazing!!! And I also really liked the irony that when Allison turns into a vampire, an event that should have got rid of her humanity, made her have more humanity. I just loved that little irony.

This is one of the few books that live up to the hype. I would recommend it to anybody who hasn't read it yet. And if you are putting this book off, like I was, read it now, because this book is amazing and so great!! Although, don't go into this book expecting a light read, this is a dark haunting book. Just realize that before you go into this book.