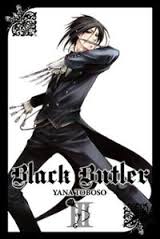 Terrorizing its populace, Jack the Ripper has shaken London to its very core. But when Sebastian Michaelis, singular butler of the Phantomhive house, lays bare the madman's true identity, all that is left for him to do is eliminate the perpetrator in the name of the Queen and Phantomhive. But inhumanly efficient skills don't guarantee victory when the opponent is just as supernaturally gifted! And though Sebastian may be able to save Ciel from physical harm in the battle that ensues, will the young earl ever recover from the emotional scars it will leave on his heart?

This one starts right where the last one ended. And it was really great to read Sebastian fight again and to see Madam Red's past to see why she did what she did. This whole volume was great to read!  And it was also interesting to read Sebastian's true nature come out just a little bit. There was some parts where you could tell he was a devil, but than he would go back to his normal gentleman manner.

And this whole volume isn't just about the fight between Sebastian and Grelle. It's kind of weird, because after the fight it's like a whole new volume started. The Ripper case is said and done with and it's never really mentioned again. So, it feels like it's two volumes.

I just love this series and if you are looking for a new manga to read I would highly suggest this one, it's great. I can't wait until it starts getting more in-depth in the whole Demons and Grim reapers world. Also the ending gives you just enough of a nugget to makes you wonder whats going to happen in the next volume.