Predictions and Hopes (3) Ignite Me by Tahereh Mafi 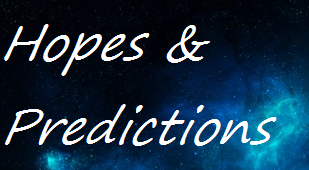 Ignite Me by Tahereh Mafi The heart-stopping conclusion to the New York Times bestselling Shatter Me series, which Ransom Riggs, bestselling author of Miss Peregrine's Home for Peculiar Children, called "a thrilling, high-stakes saga of self-discovery and forbidden love"Juliette now knows she may be the only one who can stop the Reestablishment. But to take them down, she'll need the help of the one person she never thought she could trust: Warner. And as they work together, Juliette will discover that everything she thought she knew-about Warner, her abilities, and even Adam-was wrong.In Shatter Me, Tahereh Mafi created a captivating and original story that combined the best of dystopian and paranormal and was praised by Publishers Weekly as "a gripping read from an author who's not afraid to take risks." The sequel, Unravel Me, blew readers away with heart-racing twists and turns, and New York Times bestselling author Kami Garcia said it was "dangerous, sexy, romantic, and intense." Now this final book brings the series to a shocking and climactic end.

This book is one of my most anticipated 2014 release. I love this series, all of the books so far are outstanding and I have so many high hopes for this one. So I really hope that this book meets the bar that has been set for it, not just by me but by the whole fandom. Besides this being the next book in a fantastic series it is also the last one and in my opinion the last book in the series should always be the best. So I really hope that Tahereh Mafi can deliver an outstanding book that will blew the readers away. I know that's a lot to expect for this book, but again it's the last one and I always have high expectations for the last in a series.

Besides hoping it will just generally be a good book, I also hope that the war is more in the plot. I feel like these books are about the war, but there hasn't been a lot of waring going on. There were a few battles in the last one, but we weren't really that involved in the war. I also hope that there is a hug epic ending battle. I want this to end with a bang.

Th last thing that I want to happen in this book is I don't want either of the love interests to die. I just hate it when an author resolves a love triangle by killing one of the love interest off.  I just hate this, because than it doesn't feel like she/he choose the person, it feels like they're just settling for that person. And I just really don't want that to happen with this series. Also I don't want to see either of them die.

That's what I really hope to happen in this book. I didn't have any predictions for this book, because I'm a little afraid to. I don't want anyone to die in this one and I don't want it to break my heart.


So, what do you hope/think will happen in this one?
Happy reading