Cover Reveal: The Wolf of Descarta by

Today I come to you with a cover reveal and this one of for The Wolf of Descarta by Daniel Pike. I thank every body who is involved for allowing me to be a part of this cover-reveal.
Anyway, on the the reveal 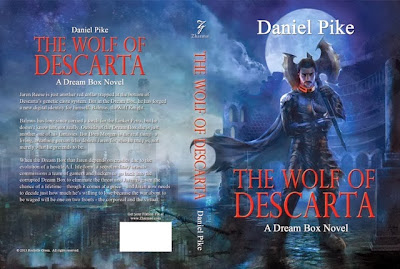 I like this cover, but it paints a completely different book then what the summary does. This one makes me think that it will be kick-A and there will be a lot of fights and battle, while the summary makes it seem more of a love story. But it looks good either way. 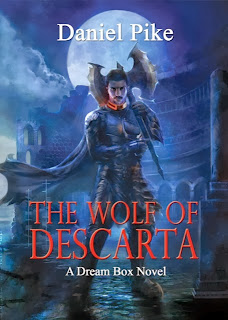 **Jaren Reese is just another red collar, trapped at the bottom of Descarta’s genetic caste system. But in the Dream Box he can forge a new digital identity for himself. In the Dream box, he is Balmus the Wolf Knight.
Balmus has long since carried a torch for the linker Petra but he doesn’t know her, not really. Outside of the Dream Box she is nothing more than a fantasy, a dream that is out of his reach. But Brea is the real thing. A living and breathing person outside of the Dream Box and Jaren needs to decide if he is willing to give up his fantasy for reality.
But when the Dream Box that Jaren depends on crashes due to the evolution of a hostile A.I. life form, a secret military branch commissions a team of gamers and hackers to go back into the corrupted Dream Box to eliminate the threat and Jaren is given the chance of a lifetime, though it comes at a price and Jaren needs to decide just how much he’s willing to loose because the war about to be waged will be one on two fronts- the corporeal and the virtual.
**

So, what do you think of the cover?
Happy reading