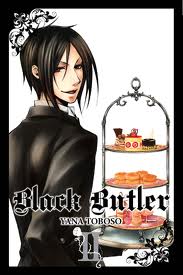 As high society's social calendar opens up and the Season draws to a close, London is gripped by fear. Someone has taken to stalking women of the night and painting the town red...in their blood. The name on everyone's lips seems to be "Jack the Ripper" - and as a result, the name on Queen Victoria's lips is Phantomhive. Summoned to London to clean up the mess created by this madman, Ciel Phantomhive arrives with Sebastian, his extraordinary butler, at his side to pour him tea, polish his silver, and...investigate a serial killer. And with the aid (and occasional interference) of a few of the Phantomhive house's numerous acquaintances, little stands in the way of the young earl getting to the bottom of this mystery. However, one question remains...can he handle the shattering truth behind it?

So, volume 2 of the Black butler series begins a few days after the events in the first one. And the Queen's hound dog goes to London to solve the Jack the Ripper cause. I was really excited to read this one and it was so good!!

I think one of the big parts on why I'm obsessed with it is because of the characters. It's like you don't know very much about the characters, but that's not a bad thing. It just makes you want to read more to puzzle these characters out, especially Sebastian. Sebastian is the type of character that creeps you out and also really interests you. Like in the beginning when he's thinking about all that stuff, it really creeped me out, but also made me want to know more about him. I know that sounded weird, but if you read this you'll understand it.

You also learn a bit more about the Demons or "Devils" in this one and also about some other creatures. Not a whole lot but just enough for you to be like "I need to know more!" And the book also ends in a cliff hanger that made me glad I had the next book already, because I really wanted to see Sebastian fight again!!

So far I am really loving this series and I can't wait to read the rest of the volumes!!! And if your interested in reading manga than I would highly recommend this one.