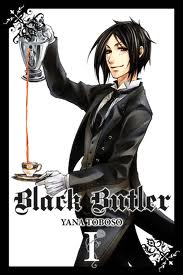 In the Victorian ages of London The Earl of the Phantomhive house, Ciel Phantomhive, needs to get his revenge on those who had humiliated him and destroyed what he loved. Not being able to do it alone he sells his soul to a demon he names Sebastian Michaelis. Now working as his butler, Sebastian must help the Earl Phantomhive in this suspenseful, exciting, thriller manga.

This book introduces Ciel Phantomhive, the 12 year hold Head of the Phantomhive Family and his butler, Sebastian Michaelis and the plot goes from there. And even though I enjoyed this book, there isn't much of a plot in this first book. It's more of an introduction book in the sense that it introduces the characters and the whole mystery surrounding Ciel's past and Sebastian. Which was fine to read, but because of it I can't tell you how good the plot of the series is yet since it hasn't fully manifested yet.

And I really liked the characters in this one. Ciel didn't get much depth in this one, although he has a lot of potential to get depth, because of all the mystery surrounding his past. And the same goes for Sebastian, it was like he had to modes, good Butler and very creepy fighter. And I can see as the series goes on, him getting more in-between modes.

The art work in here isn't anything really noteworthy. It's like any other manga, which I really like the art work in manga, but if you don't, then don't pick this series up expecting fantastic art work.

Overall I really enjoyed this book. I think it was a good set up to a potentially great series. And I can also see myself get really obsessed with this series if it gets more of a plot line.