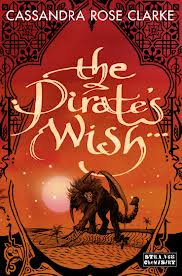 After setting out to break the curse that binds them together, the pirate Ananna and the assassin Naji find themselves stranded on an enchanted island in the north with nothing but a sword, their wits, and the secret to breaking the curse: complete three impossible tasks. With the help of their friend Marjani and a rather unusual ally, Ananna and Naji make their way south again, seeking what seems to be beyond their reach.
Unfortunately, Naji has enemies from the shadowy world known as the Mists, and Ananna must still face the repercussions of going up against the Pirate Confederation. Together, Naji and Ananna must break the curse, escape their enemies — and come to terms with their growing romantic attraction.

When I first started reading this series with the first book I had a lot of expectations. I mean this series has pirates, assassin's and an impossible curse it sounded great! However, the first book disappointed me. Even with me not fully liking the first one I still bought this one right when it come out and read it as soon as I bought it. Why, you ask, because I still had faith in this series and I felt like this one would redeem the first one. And boy, did it ever. This book was great! It had everything you would want in a book!

First off, one of the things I didn't like about the first book was how not much happened and it felt to much like a set up for the rest of the series. This plot was everything I was looking for in the first! It instantly captures your attention and never gives it back. And there was so many battles and magic and awesomeness in this plot. I just loved it!!! It just had so much in it, you couldn't go 2 chapters without something happening. This really was a great pirate book!

And the characters got better in this one! I loved Annanna in the last one, I felt she was such a strong character and that carried over to this one. She was a great character! Although I get a little frustrated with her when she could have gotten the answers about Naji if she wanted and would have saved a lot of time. But no, she had to be stubborn and ignore it and be miserable and make other people miserable.

And I felt so much closer to Naji in this one. I don't know what it was that made it that way, since we still didn't see much of his past. However, we did see inside he's head a few times. So, maybe it was that. But anyway, I loved he's character so much more in this one, not only did I feel closer to him, he felt more real. He had more depth to him. It was great!

And If possible, I loved the romance even more in this one!! It was so real and natural and in some places tragic. I just loved Annana and Naji together. They are such a great couple!

So, If you read my review for the first one, you know I had this issue I couldn't explain. The plot just went to fast. You could barely remember what happened a few pages ago. That issue carried over to this book and I figured it out why guys. It is the author's writing style. She doesn't use any adverbs or adjectives and she barley wrote any detail because of it. Of course she did wrote detail when need be like this person was tall or he sounded sad, stuff like that. But besides that, nope she didn't do it. When Annana was sad all she wrote was "I felt sad" That's it. And I'm not saying that's bad. It reminded me of Maria V. Snyder's writing a little bit. But it caused you to read it so fast that you couldn't really remember a lot of things. I am not saying that she is a bad writer because of it, she's not. I'm just saying it made the book go faster.

Overall, this book was so fantastic!! The plot was so good and unique! And everything was great! I loved it, it put you on a journey that you never wanted to end. And I really wish it didn't, since it seems like this is the last one, and I wished it wasn't. It's one thing for the author to tell us what happened after that, it's another to read it. However, I'm holding out hope that there will be another one, because the author did leave a few things that could contribute to another book.

That's my review, hope you liked it.
Happy reading