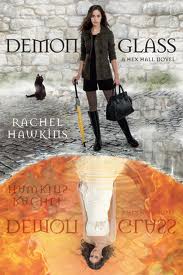 Sophie Mercer thought she was a witch. That was the whole reason she was sent to Hex Hall, a reform school for delinquent Prodigium (a.k.a. witches, shape-shifters, and faeries). But then she discovered the family secret, and the fact that her hot crush, Archer Cross, is an agent for The Eye, a group bent on wiping Prodigium off the face of the earth.
Turns out, Sophie's a demon, one of only two in the world-the other being her father. What's worse, she has powers that threaten the lives of everyone she loves. Which is precisely why Sophie decides she must go to London for the Removal, a dangerous procedure that will either destroy her powers for good-or kill her.
But once Sophie arrives, she makes a shocking discovery. Her new housemates? They're demons too. Meaning, someone is raising demons in secret, with creepy plans to use their powers, and probably not for good. Meanwhile, The Eye is set on hunting Sophie down, and they're using Archer to do it. But it's not like she has feelings for him anymore. Does she?

I'm re-reading this series, because it's fantastic!! This is the sequel to Hex Hall, one of my all time favorite books. I loved this book as much, if not more than Hex Hall. This book has all the humor and great characters from Hex Hall plus an outstanding plot!! This book was such a great installment to this series!

The plot starts out six months after the events in Hex Hall. And you don't miss anything from this, the six months was just her going to school.This book has so much going on it. Sophie meets her dad and gets close to him, the Eye is back (With Archer), People are dying, and their whole world is on the brink of war. It was great!! It hooked you from the beginning and never let you go. And it brings back the humor that had you laughing in every chapter in Hex Hall. You can laugh non-stop in this book. However, that doesn't mean this plot is nothing but fluff. This plot has this edge of seriousness in it that captivates you and really makes the book.

One of the best parts of this book was the tension between Sophie and Archer. You could just feel it when they where close to each other. I loved that!! I just love tension between characters in books. It makes the characters feel more real and it adds to their relationship.

Speaking of the characters Rachel Hawkins has this gift of writing these realistic well-rounded characters!! The characters in these whole series are so real and had so much depth to them. All of these characters, the good, the evil, are just so well written and fantastic. Sophie is such a great main character. You can't help but love her and wrought for her. It also helps that she has the best humor I've seen in a character.

Overall, this is another great book by Rachel Hawkins. And if you haven't picked up this series yet, do it now! I am in love with this series! It's great!

That's my review, I really hope you pick this series up.
Happy reading