Top Ten Most Intimidating Books (might be intimated by size, content, that everyone else loves it but you are sure you won't etc)

This one was hard for me for whatever reason. And I could only think of nine books instead of ten, which is fine. 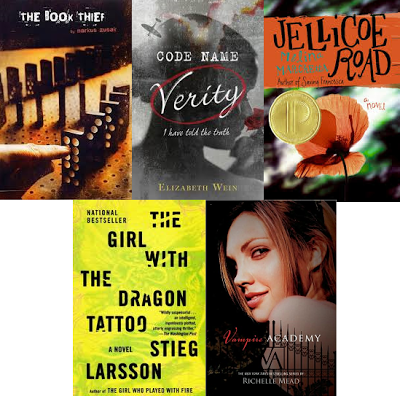 
This one is just so hyped up, everybody says it moved them and was so though-provoking. And it would be just my luck to hate a book that everybody says is a work of art.


I have the same reasons for this one has the Book Thief. It's suppose to be this outstanding book that will break your heart. And I'm just so scared to read it!


This one is suppose to be this fantastic contemporary, but since most of the time I can't stand contemporaries I'm a little nervous this one won't deliver.


The Girl with the Dragon Tattoo by Stieg Larsson


After buying this book I was really excited to read it. However, A while later my brother checked this book out of the library and the librarian told us that you need to write notes for this book. NOTES. I'm a little nervous for this one now

With All My Soul by Rachel Vincent


This one is simple, I don't want this series to end! I just don't. I've had this one since it came out and still haven't read it.


This one doesn't need an explanation.


This is another simple one, it's a classic and because I want to love this one and I'm afraid I won't.