Review: Fledge by J. A. Huss

Warning, do not read any farther if you have not read the first book Clutch, my review of it HERE. 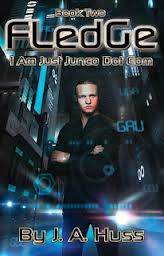 Junco Coot can’t even remember her trip off Earth; she was too busy being morphed into her new avian body. But reality hits her hard when she wakes up to find her new life is not what she expected. Not even close.

Tier is on trial for treason, the avian president wants her dead, her new military team is hostile, her body is being taken over by an illicit AI, and her only friend is a ten-year old throwaway boy.

In most places the avian Fledge ritual would be nothing more than mass murder, but here in the capital city of Amelia, it’s called growing up. Junco has two choices: fight to the death to prove her worth, or get sent back to Earth in the hands of her enemies.

In a foreign culture and surrounded by people she can’t trust or count on, Junco must find a way to save herself and Tier without losing her immortal soul in the process.

Wow, um I don't really know where to start this review; I had a lot of thoughts when I finished this book. In summary I loved this book. It was so much better then the first, the plot was amazing, the writing was great, and the characters felt so much more real than in the first one. However, some of the minor problems in the first book also carried into this book.

The plot blew me away. It was so much better then the first book where there were only a few fight scenes in the whole book, but in this book there is a fight scene in almost every chapter. The plot captivates you from the first page until the very last word. It's just so good.

What I was most excited for was the alien world. I was excited to see how the author would create the world and their culture and everything. I was a little disappointed when I figured out that their world, along with parts of their culture, was highly influenced by Earth. However, while their world was influenced by Earth, their thought process and morals were not. Like Junco once said "what would have been considered mass murder on earth was considered growing up here". I was just so appalled and I was waiting for the main character to also be, but this is Junco we're talking about and she's complicated.

Complicated describes my feelings for Junco to a T. In the first book, I was really thrown off balance by Junco's I-Don't-care attitude and that also carried into this book. Half of me admires her strength and intelligence and her bravery, but the other part of me is disappointed with her. I was waiting throughout this whole book for her to say "Screw this, you people are awful, I'm not listening to you" but she never did. She followed her orders, even if they where to murder people in cold blood and then she would go off on this self-hatred rant instead of hating them. Right when she was redeeming herself to me she would go back to her original self. I still think she is a very well written character and I did connect with her, I just couldn't decide if I really liked her or not.

One of the best things in this book, besides the plot, was how the characters felt so much more real in this book. In the last book, I only felt connected to Junco, but in this book I felt a connection to every character, new or old, and yes it includes Junco. And every character was so well written.

In my review for the first book I said that some things weren't explained and this book also had some of those, but not as much as the first one. Also some of my questions from the first book where answered in this book, like what are the seven siblings suppose to do, and what is her SEAR knife thing. I was really glad about that.

Overall, This is the first time a sequel was better than the first book. This book had a plot that blew me away and I felt connected to every character and it was just so good!! I can't wait to read the next book. However, if you are looking for a book series that is light and fun then you won't like this as much, because it is a very serious book with lots of death and fighting and I really loved it! I would recommend it to every paranormal, assassin, action fan out there.

Recommended if you like: Science fiction, Assassin books, and the I Am Just Junco.


That's my review, I hope you pick these up, because their great.
Happy reading.