These are going to be some very short reviews, because I have some thoughts just not a lot and I really want to review them. So, I am just going to write short reviews for them.
Also a little bit of background before I go into the reviews, I watched most of this series on netflix, because its also an anima. I really love it so I wanted to read the manga and hear we are. Anyway, because of that I might be a little biased on the character development and mystery part of it so I won't go into detail about my thoughts on them. 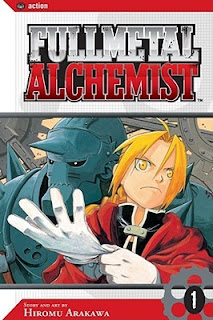 Alchemy: the mystical power to alter the natural world; something between magic, art and science. When two brothers, Edward and Alphonse Elric, dabbled in this power to grant their dearest wish, one of them lost an arm and a leg...and the other became nothing but a soul locked into a body of living steel. Now Edward is an agent of the government, a slave of the military-alchemical complex, using his unique powers to obey orders...even to kill. Except his powers aren't unique. The world has been ravaged by the abuse of alchemy. And in pursuit of the ultimate alchemical treasure, the Philosopher's Stone, their enemies are even more ruthless than they are.

This volume does a great job introducing the characters and the world to the readers. It introduces all the major characters Edward and Alphonse Elric who are brothers and our main characters. It also introduces Roy Mustang who has a big part of the plot later on (and who is awesome). The one thing that I loved was how your first impression of Edward was that he was an arrogant brat, but as the story progressed and you saw some of his past you learn that he isn't all arrogant, he is also wise. He has been though so much in his 15 years that he has a wisdom that most old people have, because he has that and he is just an teenager it comes off as arrogance. I really like how his character is so layered.

The plot was really fast paced for the first volume in the series, there is action in every turn and Edward being very cunning in a smell minor town. What really drove the plot was the group of people who were introduced and, even though not much is said about them, you know are the bad guys. When you read that part you want to read the rest to see if anything else is said about them

Over all, I would recommend this book to a person who is just starting Manga or to a person who's been reading manga for a while now. And if you read this you will find your next "book boyfriend" because Edward Elric is all kinds of awesome. 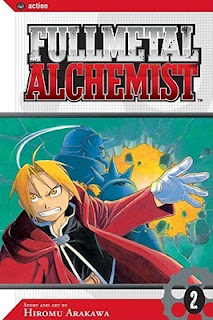 In an alchemical ritual gone wrong, Edward Elric lost his arm and his leg, and his brother Alphonse became nothing but a soul in a suit of armor. Equipped with mechanical "auto-mail" limbs, Edward becomes a state alchemist, seeking the one thing that can restore his brother and himself...the legendary Philosopher's Stone.


There are many types of alchemy in the world. Edward's commanding officer, "Flame Alchemist" Roy Mustang, can control fire. Shou Tucker, the "Sewing-Life Alchemist," specializes in the most difficult alchemy of all...biological transmutation, the ability to alter the tissue of living things. But no matter what their power, alchemists are still human. And when a mysterious killer begins stalking state alchemists, no one can escape his vengeance.

More characters are introduced in this one, some military people and some other alchemist's. Roy Mustang gets more depth in this one (This is where I really started loving Mustang). The intermediate villain is also introduced, who I think is an awesome villain. Anyway, the plot picks up right were it left off and while there is some serous thinking on Ed's part the plot is still filled with action and fight scenes and humor. You can't read 10 paged without laughing your head off, these characters are just so funny!
There is some heartbreak in this book, when I was both reading the scene and watching it I just couldn't help but cry its just so sad!
The group of bad people are also in this and again there is an air of mystery surrounding them, but the author only gives you breadcrumbs on who they are and what they are doing. All you really know is that they are evil.
Like I said before, I would recommend this series to everyone, its so good. I love the characters, the plot, the illustrations, everything about it. Just read this.
would also recommend that you buy the three in one volumes, because I can never decide if I like a manga on the first volume 'cause it's so small.
I gave both of these...

﻿
﻿
That was my very small reviews. I hope you pick these up, because they are great.
Happy reading.