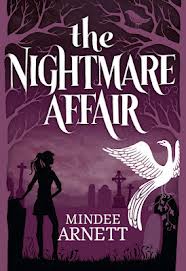 Sixteen-year-old Dusty Everhart breaks into houses late at night, but not because she’s a criminal. No, she’s a Nightmare.

Being the only Nightmare at Arkwell Academy, a boarding school for magickind, and living in the shadow of her mother’s infamy, is hard enough. But when Dusty sneaks into Eli Booker’s house, things get a whole lot more complicated. He’s hot, which means sitting on his chest and invading his dreams couldn’t get much more embarrassing. But it does. Eli is dreaming of a murder.

Now Dusty has to follow the clues—both within Eli’s dreams and out of them—to stop the killer before more people turn up dead. And before the killer learns what she’s up to and marks her as the next target.

So, this book was one of my most anticipated read in 2013. The summary sets it up to be a murder mystery with nightmares in it, who doesn't think that sounds good? When I was approved to read this early though NetGalley I was really excited, but sadly, it didn't blow me away like I hoped it would. It was good start to a series that I can see really loving, but it wasn't as good as I hopped.

This book starts with our main character breaking in to someones house to feed from their dreams. It is not as creepy as it sounds, trust me. When the guy wakes up and she can't use magic on him she runs back to the academy and learns there has been a murder on campus. The plot picks up from there.

One of the things that really disappointed me was it didn't go in depth on what a nightmare is. The book gives you some background to the species, but it doesn't give you a lot. That really disappointed me, because I thought this book was going to be mostly about nightmares and it isn't. The setting was in an academy were kids that are magical beings can go to and because of that it really remind me of the Hex Hall series.

However, the flip side to that is I really like how the author (save for the nightmares) does the magical elements in this book. She gave her own twists to fairy's and witches and all that and I really like how she did that.

Something that I figured out while reading this was how all the series that are set in academy's (Hex Hall, Mythos Academy) have the same mold for the first book. I'm not saying that all the series are the same, just that the first books have the same mold. The mold being that the main character just got to the academy, has almost no friends, someone gets murdered, the main character has to solve it, and along the way gets new friends. I'm not saying that's bad, I love the Hex Hall series and the Mythos Academy series, it just makes the first book a little predictable.

This book was also really funny. The main character has so much snark in her and its just makes you laugh and laugh.

All in all, this book was a really fun and entertaining start to a series that I look forward to reading. Although it wasn't the outstanding book that I hopped it would be it is still a good book I would recommend it to any lover of paranormal books.

Recommend if you like: the Hex Hall Series, paranormal creatures, and mystery.

Also don't forget to enter my 100 Followers Giveaway for your chance to win either a copy of Unravel Me by Tahereh Mafi or The Madman's Daughter by Megan Shaperd.


That's my review, if you read this book what did you think of it?
Happy reading.