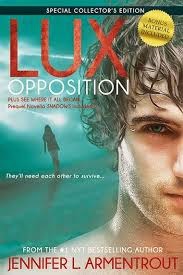 Katy knows the world changed the night the Luxen came.She can't believe Daemon welcomed his race or stood by as his kind threatened to obliterate every last human and hybrid on Earth. But the lines between good and bad have blurred, and love has become an emotion that could destroy her—could destroy them all.Daemon will do anything to save those he loves, even if it means betrayal.They must team with an unlikely enemy if there is any chance of surviving the invasion. But when it quickly becomes impossible to tell friend from foe, and the world is crumbling around them, they may lose everything— even what they cherish most—to ensure the survival of their friends…and mankind.War has come to Earth. And no matter the outcome, the future will never be the same for those left standing.

It is no secret that the Lux series has been one of my all time favorite on-going series since the first book released. I have loved every book so far in the series. I have eagerly devoured each book, reading long into the night to see what happens to my beloved characters. I have accepted the flaws and loved the good parts. So, I was both devastated and eager for the last book to release. I was also very nervous for it's release, I really wanted the final book to be epic. It was, it really was!

This book starts out two days after the event of Origin and goes from there. This book was a rollercoaster ride of emotions (yes someone dies) and plot twists with really fast pace. I was kept on the edge of my set from begining to end! What I really loved about this plot was that it felt like an adventure book. The plot never stayed in one direction for very long. The characters would be in one setting doing one thing and then BAM! Something happens that changes the course of the book, but the plot would still keep it's underlying focus. This makes the plot sound really jumbled up, but it wasn't. The author wrote it in such a way that it felt like a rollercoaster. The plot was zumming forward, taking twists and turns, but the cars never change rollercoasters or anything; you are still on the same ride.

The characters were, as usual, great!! I love Katy, Daemon, Dee, Luc, and Archer. They were just as likable as in the other books; they were very realistic, and I loved them so much!! On that note, the romance was amazing! Jennifer L. Armentrout knows how to write a romance, sexy and/or cute. Katy and Daemon are just so cute together! When they are together you can practically see their chemistry and how much they love each other. There was this one scene with Daemon holding Katy and just reflecting on how he will always fight for her and I was struck with how real their love feels to me. I can't convince myself that their love isn't real.

Now on to the things that I wish were better. The first was the dual POV. Katy and Daemon's POVs had slight differences to them, but not enough to know who's POV it is just by reading a few sentences. This was a little disappointing, but I"ve been thinking about this and I think it's because of how alike Daemon and Katy were. They are both sassy and sarcastic, which are two aspects that really shine in dual POVs. So I don't think the author had that much wiggle room to really distinguish between POV without changing, even slightly, a character, which would have annoyed me even more.

The biggest problem that is really just a minor one, is how short this book was. This is me both not wanting the series to end and me wanting more to this plot. Jennifer L. Armentrout could have added another 100 pages and it would have made it all the better!! I just felt that this book went to fast, it was set in a week or so time span, especially for such a series situation. -Slight Spoiler Section-I wish the 'war' part lasted longer and there were more fights. This invasion was set up to be such a series thing, and at first the author showed us the death and pain the Lux created, but then glossed over it. I just wish a 100 pages, or even 50, were added before the Arum part so this invasion/war felt more like a war. I'm not saying the Lux's defeat felt easy, it just was to soon for that defeat. -End-

This was a great conclusion to this lovable series! I am so sad to see this series go and to finish this review, because if I finish this review I will be accepting that one of my favorite series it over. The open end gives me hope that She'll make a spin off series 15 years later in the world, but I am still sad. I am going to miss reading about Katy and Daemon's life and seeing their relationship grow. I'm going to miss reading about the Luxan and the Arum. I'm going to miss being in this world.