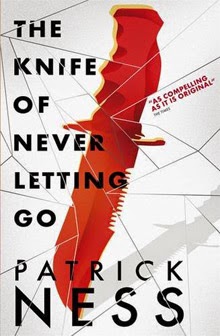 Prentisstown isn't like other towns. Everyone can hear everyone else's thoughts in an overwhelming, never-ending stream of Noise. Just a month away from the birthday that will make him a man, Todd and his dog, Manchee -- whose thoughts Todd can hear too, whether he wants to or not -- stumble upon an area of complete silence. They find that in a town where privacy is impossible, something terrible has been hidden -- a secret so awful that Todd and Manchee must run for their lives.
But how do you escape when your pursuers can hear your every thought?

So, this book series has some....or rather a lot of hype surrounding it. So many people have read this series and love it! I don't think I've encountered anyone who has read it that didn't end up loving it.
So, naturally I was curious and just now got to reading it (I know you're not suppose to judge a book by its cover, but besides the hype, I bought this book because of its beautiful new covers). I am so glad I started this series! This book was pure genius! I was just so freaking amazing!!

If you don't know, this book is about the life of Todd who lives in a town where people can hear the Noise. The Noise is basically people's thoughts. So, everyone can hear each other thoughts, but they can never shout it out of stop their own Noise and the Noise just isn't people's rational thoughts, but also the nonsense. So people hear the constant stream of conscience from other people and it gets overpowering sometimes. One day Todd hears, or rather doesn't hear, a pocket of quietness in the outskirts of town. This creates a landslide of events that makes Todd have to leave the town, which is bad because he has been told his whole life that Prentisstown is the last town on the planet.

Speaking of the world, the world building in this book was great!! Patrick Ness did a fantastic job on building this world, both visually and socially. While sometimes he wouldn't describe how something visually looks, but he was great at describing the tone of a place. If a path through the woods was dark and creepy he would make sure you would be as terrified as the characters to go down that path.

This book is a lot darker and more emotional than I thought going into it. I thought that this was going to be an action packed book and while it was full of action it was beautifully balanced with the emotional troubles of the characters. The author wrote how much the Noise affect Todd and the other characters and it was just so heartbreaking to read!! Added on to that, I love how many themes the author put into this book! The theme of killing and how that effects people, racism, dealing with pain, and many more. These themes made this book just so beautiful to read.

The one thing I had a slight issue with in this book was while the plot had a good pace and never had a boring part I wasn't really immersed in this book until the last half. I don't know why thing is, maybe because even with all the character development I didn't really connect with them until closer towards the end. I think this is because the issues they were having I have never felt before. I don't know what's it like to always hear people's thought or what it's like to live on that planet. However, towards the end the other themes, the ones I mentioned before, came more into play and I completely got into this book!

Overall, I am so thankful that I finally read this book and I can't wait to continue this series!! This world was so captivating to read about, the plot never faltered in it's pace, so many great themes were beautifully woven into the story, I loved it!! I would recommend to anyone who hasn't read this one yet.