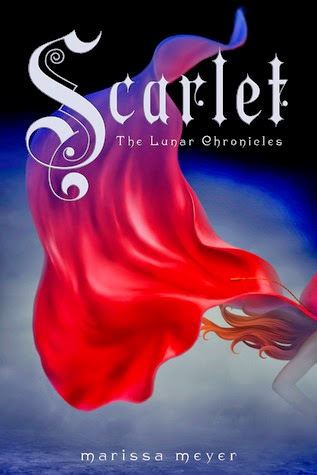 This is not the fairytale you remember.

But it’s one you won’t forget.
Scarlet Benoit’s grandmother is missing. The police have closed her case. The only person Scarlet can turn to is Wolf, a street fighter she does not trust, but they are drawn to each other.
Meanwhile, in New Beijing, Cinder will become the Commonwealth’s most wanted fugitive – when she breaks out of prison to stay one step ahead of vicious Queen Levana.
As Scarlet and Wolf expose one mystery, they encounter Cinder and a new one unravels. Together they must challenge the evil queen, who will stop at nothing to make Prince Kai her husband, her king, her prisoner . .

I read Cinder last year due to all of the hype around it and when finishing it I was a little disappointed. I think the hype made me have such high expectations around it that it was unfair because it would never be able to meet it. Since I didn't really LOVE the first one I wasn't in a hurry to read Scarlet, even though I heard that it was better then Cinder. However, when this one finally came out in paperback I finally went ahead and bought it and read it. The finally verdict with this book, I liked it. A lot. However, I still had the same mysterious issue with it that I had with Cinder.

So, if you don't know what this book is about even with all the hype around these series, I applaud you. These books are everywhere. But basically, this book is a re-telling of Red Riding Hood. I really liked how the author twisted that story to fit this plot line. I thought it was really inventive and really modern, which, considering this series is set a hundred or so years from now, really fits the story. (Side Note) I also really like how these books aren't just one story. They tell the stories of many people who contribute to the events around them. I just really like how there is one main story line and all of the characters that are shown fit in it. It isn't just Cinder's story, or Wolf's story, it is all of their together. I really like series like that.

I loved the new characters in this book. Don't get me wrong, I loved Cinder, but I think I liked Scarlet better. She was such a fighter!! I have no doubt that if she learned to fight, she would kick-ass. I also really loved how she did was she threatened. If she said she was going to shoot you, she shot you. She didn't bluff when she issued a threat. I also love how she is able to pull her emotions together and do what she needs to do even if she is dying emotionally inside.

I also really liked Wolf, which surprised me considering I didn't feel like he got a lot of depth. We saw his conflicting emotions, sure. We got to read a chapter from his point of view, yes. But I didn't feel like he got enough of depth that he deserved.  However, I still really enjoyed his characters and loved reading from his POV. I really hope we get more character development from him in Cress.

What I love most about this series is the world. This author knows how to be inventive. She also really knows how to craft a world. She gives us just enough information about the world's  history scattered throughout the whole book, that it doesn't feel forced. It slowly broadens our perception of this world, making it feel more realistic each time we read a  new fact about it. Because of how wonderful she built and is building this world, it feels real. It felt so real that when she was talking about the Louvre getting bombed in World War 4 that I got misty eyed. I love art and what the Louvre stands for that I would be devastated if that happened. She also made it feel like I was there in that time frame, after World War 4, that I started regretting the waste of the destruction of the Louvre would cause. Then I caught myself and I'm like: No this didn't happened, the Louvre is still standing. This women is just such an incredible author!!

Now on to the confusing stuff. The plot in this book was enjoyable. I loved reading it. However, whenever I put it down I didn't feel the urge to pick it back up. I don't know if this was because of the pacing (doubtful) or what. It may be because this book didn't captivate or enchant me. I was interested in the plot and what was going to happen next, if that character would survive or not, but I was never full invested into it. I never fell into this story and lost myself in it. The same thing happened while reading Cinder. I'm just not reading the spark that everyone else is and I hate it! I want to love these books, I want to be captivating and hold prisoner by them, but I'm not.

None the less, I still really enjoyed this one. I thought it was a fabulous continuation to this story  and I can not wait to read what happens next. I was so happy to read that Cinder will be stepping it up in the next one; I cant wait to see her kick same alien ass in the next one! I would suggest this series to anyone who hasn't read them yet, but be for warned that they might not live up to your expectations. However, they still are thoroughly enjoyable.