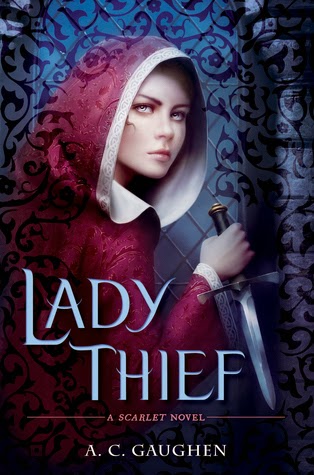 Scarlet’s true identity has been revealed, but her future is uncertain. Her forced marriage to Lord Gisbourne threatens Robin and Scarlet’s love, and as the royal court descends upon Nottingham for the appointment of a new Sheriff, the people of Nottingham hope that Prince John will appoint their beloved Robin Hood. But Prince John has different plans for Nottingham that revolve around a fateful secret from Scarlet’s past even she isn’t yet aware of. Forced to participate at court alongside her ruthless husband, Scarlet must bide her time and act the part of a noblewoman—a worthy sacrifice if it means helping Robin’s cause and a chance at a future with the man she loves. With a fresh line of intrigue and as much passion as ever, the next chapter in Scarlet’s tale will have readers talking once again.

Scarlet was on of my top favorite books from last year. I loved it to bits!! So, of course I had to get my hands on and start reading Lady Thief as soon as I could. I was a little nervous going into this one, because I heard that it wasn't as good as Scarlet and Scarlet was so great that there was a good chance that this wouldn't be up to par with it. So, naturally I was nervous that this wouldn't meet my expectations. I should not have doubted this author!! This book was so freaking amazing!! It was an outstanding sequel with an brilliant plot that was written wonderfully!! Everything in this book was incredible!!

So, this book picks up two months after the event at the end of Scarlet. This fact surprised me a little. I thought that it was going to start right after she gets married and the main conflict of the book would be her coping with the fact that she's married. No, not even close. She almost accepts that fact that she's married and she thinks so can't do anything about this. I just didn't think this book was going that direction. Actually this book went no where that I thought it was going to go. The plot was somewhat predictable, but overall I had no idea what was going to happen, at all, which was great to read.

Speaking of the plot, this book took me on a rollercoaster ride. So many things happened!! Even though it wasn't action packed 100 percent of the time, it was still fast paced. I got through this book in two days. That is a short time considering I was swamped with homework at the time. Not only did this book capture my attention it was so emotional. I got so attached to the characters in the first book and that only grew in this book. So it was really hard and sad to see them going through this shit. It was just so unfair on how these character's lives went. None of these characters deserves to have this sucky life and it broke my heart in half to see them suffering. Add that to the fact that the ending didn't just broke, but crashed on and burned the pieces of my heart. I didn't want him to die!! Why did you kill him author, why!!!

Like you could probably guess, I love these characters!! This author knows how to write amazingly complex and realistic characters. I don't feel like these where just made up characters that an author made up, they felt like actually people that were trapped between these pages. They had so much depth and they felt so realistic and relatable. It look forward to reading this series just for the characters. I love them so much!!

This author knows what the hell she's doing. Not only was she able to write some freaking awesome characters and made you fall in love with them, she did freaking fantastic with this world!! The world building was in that perfect between where it wasn't to much explanations where you got bored, but it wasn't to little that you got frustrated. She wrote this world so wonderfully that you could see  everything so clearly, it was fantastic!! Not only that, but she wrote the mood so well. It was like you could not only see the world, but feel it as well. You could see the buildings and the forest and the town's people and you could also feel the hopelessness and suffering that flows through the air as if it was the wind. This world just felt so amazingly real.

Last thing I want to talk about is the romance. In the first book we were reading about Scarlet and Robin denying the fact that they love each other. They where avoiding it and just didn't want to go there in the chance the other one didn't love them back. But in this book we get to see them together and it was so great to read! Scarlet and Robin are perfect together. You can feel their chemistry and their love for each other coming off the pages. They balance each other out and they bring the best out of each other. They where also so cute together!! I loved reading their scenes, because the cuteness and love that comes off the pages could kill someone.

I loved this book! I think I might of liked it better then the first one. I was sitting here writing this review trying to remember anything I didn't like about this book, but I kept coming up blank. This book was just outstanding, this whole series so far as been so freaking good!! If you have yet to read this series, just what are you doing with your life? Read these books now!