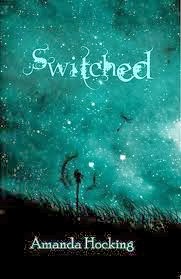 When Wendy Everly was six years old, her mother was convinced she was a monster and tried to kill her. Eleven years later, Wendy discovers her mother might have been right. She’s not the person she’s always believed herself to be, and her whole life begins to unravel—all because of Finn Holmes.
Finn is a mysterious guy who always seems to be watching her. Every encounter leaves her deeply shaken…though it has more to do with her fierce attraction to him than she’d ever admit. But it isn’t long before he reveals the truth: Wendy is a changeling who was switched at birth—and he’s come to take her home.
Now Wendy’s about to journey to a magical world she never knew existed, one that’s both beautiful and frightening. And where she must leave her old life behind to discover who she’s meant to become…

So, this was the first Amanda Hocking books I read and this is where my love for her books grew. I read this series a few years back and loved it!! I thought it was really great and the world was so very interesting. And I wanted to re-read this series, or at least start re-reading it, before the year ends.

Why I really love this book series so much is the paranormal creatures in it. I love how Amanda Hocking wrote about trolls, of all things this book is about trolls. I just really like how she took such a known paranormal creature that no one really writes about and put a twist on it. It was such a unique concept that I just fell in love with it! And the author wrote about it so well that it really sticks with you even months after you've read it.

I just love the world that this is set in!! I know it's just set in the U.S but I love the society the 'trolls' live in. I really liked how they lived and the system their world has. I really liked this because the author made it flawed. How they do the 'changeling' thing and how the trackers are basically slaves. I just really liked this, because I think it would have taken away from the story if this society was perfect. The fact that it isn't brings a lot of tension to the plot.

I also really loved the writing style in this book. The author explains the world building so well that you get such a vivid picture of the world in your mind. And I almost never encounter this in world building. I also really liked how she wrote the abilities thing. We haven't seen much of anybodies abilities yet, but she far it's pretty cool.

Now on to the things I didn't really like. I've seen a few reviews on this series where the reviewers say that the main character, Wendy, is a little....a lot annoying. Whenever I saw this I didn't really understand it. The first time I read this I really loved Wendy, but now that I've re-read it I still love her but I can understand what they mean. Wendy is a very self-centered person. She not vain or thinks that she is better then everyone, she is just very self-centered. She never thinks about how a decision she makes will affect other people, just how it will affect her. This annoyed me a lot. But don't worry people who've read this and didn't continue the series because of this, she gets better throughout the series.

The next thing I didn't really like was the romance. Don't get me wrong, I liked Finn, but the romance was just so cliche and predictable. Did anyone not see that she was going to fall for Finn from just reading the first 40 pages? Anyone? I also didn't like how Wendy only really thought about Finn. It was Finn this, Finn that, What's Finn doing, Where's Finn, it got really annoying!

Overall I thought that this was a good start to a series. There were some aspects that I didn't like, mainly the main character, but the good out shined the bad. The world and the paranormal creatures written about where just so interesting and well written that I couldn't help but really enjoy this book. I would recommend it to any Amanda Hocking fan and any paranormal fan.