Review: Of Triton by Anna Banks 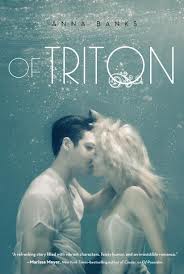 In this sequel to OF POSEIDON, Emma has just learned that her mother is a long-lost Poseidon princess, and now struggles with an identity crisis: As a Half-Breed, she’s a freak in the human world and an abomination in the Syrena realm below. Syrena law states that all Half- Breeds should be put to death.
As if that’s not bad enough, her mother’s reappearance among the Syrena turns the two kingdoms—Poseidon and Triton—against one another. Which leaves Emma with a decision to make: Should she comply with Galen’s request to keep herself safe and just hope for the best? Or should she risk it all and reveal herself—and her Gift—to save a people she’s never known?

If you don't know, when I read Of Poseidon I wasn't really impressed.  And even with that cliffhanger ending I wasn't super excited to read the next book. However, when I saw this ARC up for trade I just had to get it, mainly for the cover. And I went into it not expecting much, but it was so much more than the first book! It was great! The plot was great, the characters and romance so much better. It was such a great book!

Anyway, this book starts out almost right when the first ones lets out. It throws you right back in the plot and never lets you go. I loved it! It was so fast paced the pages just fly's through your hands. I could barley put this book down, because I needed to know what happens. It was so good! And it wasn't as predictable as the first book, which was a plus.

I also really loved the characters in this book. I said the same thing for my review of the first one and I also said my main problem with Emma, the MC, was how she didn't stand out. However, in this book I think she did. I liked her so much in this book. I liked how real she felt and how when she acted childish she realized it and scolded herself for it. She wanted to be more mature and I felt that is such a real thing to do. Sometimes you just think childish things and you hate yourself for it. That just made her so much more real to me.

I can't really comment on the romance in this book, because considering I don't remember what I thought of it in the first book. But I will say I thought it felt a little distant, for whatever reason. However, I also thought it felt really realistic. I liked how in the beginning she doubted him. In so many books the love interests never doubt each other, which is fine, but sometimes you can't help but doubt. And that's what happened in this book, Emma doubted. She didn't act on the doubt, but she still did it. Which not only made her feel more realistic but also made their relationship more realistic.

All in all, I thought this was a very enjoyable book. It kept me interested throughout the whole thing, I never wanted it to stop. I thought it was great!! Although I'm a little nervous about the next book, because this one ended to perfectly. And I'm afraid whatever the author does in the next one will just be stretching the plot. Anyway, I would recommend this series to anybody who wants a summery read, a beach read, or to people who just love mermaids.

That's my review, come back tomorrow for a Top Ten Tuesday
Happy reading