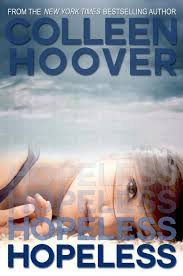 Sometimes discovering the truth can leave you more hopeless than believing the lies…That’s what seventeen-year-old Sky realizes after she meets Dean Holder. A guy with a reputation that rivals her own and an uncanny ability to invoke feelings in her she’s never had before. He terrifies her and captivates her all in the span of just one encounter, and something about the way he makes her feel sparks buried memories from a past that she wishes could just stay buried.Sky struggles to keep him at a distance knowing he’s nothing but trouble, but Holder insists on learning everything about her. After finally caving to his unwavering pursuit, Sky soon finds that Holder isn’t at all who he’s been claiming to be. When the secrets he’s been keeping are finally revealed, every single facet of Sky’s life will change forever.

There is a lot of hype about any Colleen Hoover book. I read Slammed a while a go and thought it was really good. So, naturally I, like everybody else, was really excited for this book to release. I did take awhile getting my copy, but as soon as I could I started it and it was really good! However, I had some minor and major issues in it.

To start out when I finished this book I really loved the plot. The author infused so many emotions in this plot that you were just crushed for the characters. They didn't deserve to have such crappy lives. In the end I really loved this plot. However, in the beginning I didn't think that. The plot didn't really get good for me until more towards the end with the big reveal (which I didn't see coming in a million years). Before that it was just so cliche. Girl meets boy-she is instantly attracted to him-Tug of war starts inside her on whether or not to get involved with him-Starts falling in love- starts dating him-he hurts her. It was just like that until that twist the author threw in which instantly made it a million times better.

After the big reveal, emotions where just thrown at you from every side. But the main emotion you feel, and the title really sets this up for you, is this feeling of hopelessness. You just feel hopeless, because you want to help these characters that you learned to love, but you just can't.

One of the big consequences of not being connected to characters in a emotional contemporary (and this also happened in Pushing the Limits) is that when I put the book down and picked it back up I was confused. I was confused on why Sky was feeling whatever she was feeling. I literally had to re-read some pages to get back into the story and remember the emotions the characters where feeling. Which a person shouldn't have to do in a book. However, this went away as the book progressed, because of (you guessed it) how I felt more connected with the characters. And with that in the end I was feeling the emotions and just about dying, because of them.

Do not think with all this negative things I'm saying that this isn't a good book. It is. There are a lot of great things in it.  The twist at the end will kill you and the emotions that make you die a little inside. And the relationship between Sky and Holder was one of the best thing in this book. It was sweet and had this edge of hopelessness in it that makes you rought for them. And the writing in this book was fascinating and beautiful. Even with the bad things in this you can't help but love the writing!! It was great!!

There was some bad things, there was some great things in this book. And the great just sightly outweighed the bad. So, overall I really liked this book! It was a great romance story with so many emotions in it. I can't wait to read it through Holder's eyes And if you can make it until the twist than you will love it!

That's my review, comment below if you read this book and what you thought of it.
Happy reading