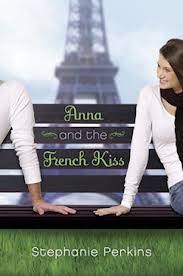 Anna is looking forward to her senior year in Atlanta, where she has a great job, a loyal best friend, and a crush on the verge of becoming more. Which is why she is less than thrilled about being shipped off to boarding school in Paris--until she meets Étienne St. Clair. Smart, charming,beautiful, Étienne has it all...including a serious girlfriend.
But in the City of Light, wishes have a way of coming true. Will a year of romantic near-misses end with their long-awaited French kiss?

I've been hearing so many things about this book. It's so hyped up, it seems like everybody has read this book. So, I finally decided to buy and read it. And it was great!!!! I loved it, it was so sweet and great to read. It wasn't as amazing as I thought it would be, but it still was a great, sweet book.

I feel like all the things are already said about this one so I will be quick on this part. I loved the plot it was so funny and enjoyable to read. And you just devour this book, the pages just flew through my hands. This plot was great. And like everybody is saying, it isn't just this book full of fluff. The author wrote it perfectly so you get a fun enjoyable plot,  but also with some serious tones to it. But I"m not going to lie, the first 130 pages I thought everybody was lying, because it was just a fun light book. And then the author threw that thing with St. Clair in, and BAM it's ten times better.

The only thing of the plot I didn't like was how in the end it was like "St. Clair we're friends, no we're not, you're a jerk, we're friends again. No you're a jerk." It was on and off of them being friends. I would have been fine if that was only one or two times, but it was too much. And it really confused me. Although, I think if I re-read it I would be fine with it.

So, the only real problem I had with this book was Anna. I liked her in the beginning, I thought she was a little bratty, but it didn't bother me, because teenagers or just like that. But Oh My God was she a drama queen. She never acted like a drama queen, but she sure thought like one. And it really annoyed me.

And she was also a little selfish. However, what I really like about her was how she realized that she was being selfish. She called herself out on it and I really liked that, because she acknowledged her flaws and tried to move past them. However, towards the end she got really selfish, there was this one scene where St. Clair runs after one of their friends who is crying and you know what she thought "OMG he's leaving me to go after her, he's rejecting me." That really, really grated on my nerves, because he was just trying to comfort her.

However, their is a ray of light for me feelings of Anna, because in the end she gets over being selfish and a drama queen. She grew, she became a better person and that was really great to read. And the author did it perfectly. I really liked in the end.

What was the best thing in this book was the relationship. I loved Anna's and St. Clair's dialogue. I loved how they bickered at each other. I loved how you could feel they're chemistry. And they're relationship was so sweet to read. I could re-read that speech at the end (you know which one) a thousand times. It was the sweetest thing to read!!! Their whole relationship is so sweet!

Even though it was sweet to read, that doesn't mean it was all sunshine and roses for them. They both made mistakes on how they handled things. St. Clair made mistakes and then Anna made the mistake of trying to force herself to move on, because she was hurt. And that is what caused all the drama at the end. And I am glad the author put that in there, because if she didn't it would have felt off, like they got each other so easily.

This review is getting long I know, but I want to say one last thing. This author is amazing writer. She wrote everything perfectly, the romance, the characters, the setting, everything. She flawlessly added depth in the characters, and I liked how she made St. Clair speak in British slang. It made him feel so much more real. And I liked how you only see St. Clair's girlfriend twice, but you still feel her presence like a dark cloud over the book. She's just amazing!.

I really, really enjoyed this book. It is what everybody says it is, it's sweet and such an enjoyable read, but at the same time it isn't just fluff. It does have that serious side to it that balanced the book out. Read this book if you haven't already. It's great, I need to get my hands on a copy of Lola and the Boy Next Door soon, like now.

That's my review, I hope you pick this book up, because the hype is write.
Happy reading