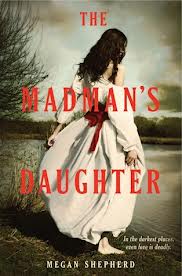 In the darkest places, even love is deadly.Sixteen-year-old Juliet Moreau has built a life for herself in London—working as a maid, attending church on Sundays, and trying not to think about the scandal that ruined her life. After all, no one ever proved the rumors about her father's gruesome experiments. But when she learns he is alive and continuing his work on a remote tropical island, she is determined to find out if the accusations are true.Accompanied by her father's handsome young assistant, Montgomery, and an enigmatic castaway, Edward—both of whom she is deeply drawn to—Juliet travels to the island, only to discover the depths of her father's madness: He has experimented on animals so that they resemble, speak, and behave as humans. And worse, one of the creatures has turned violent and is killing the island's inhabitants. Torn between horror and scientific curiosity, Juliet knows she must end her father's dangerous experiments and escape her jungle prison before it's too late. Yet as the island falls into chaos, she discovers the extent of her father's genius—and madness—in her own blood.

Usually 3 Butterflies means the book isn't that great, just average. However, this time it means that this book is smack dap in the middle of being great and being horrible. Some aspects deserve 1 Butterflies and other parts deserve 5 Butterflies. So, I am giving it 3 Butterflies, because I'm torn.

Lets start out with the great qualities to this book. I loved this plot, it was creepy and captivating, the author wrote this plot flawlessly. She has a gift at writing creepy scenes and giving them this dark tone. She is able to get your heart pumping and scare the crap out of you in some scenes. And this whole book had that dark tone in it. And that was such a great thing to read. I loved it!!

That darkness and creepiness really made the plot for me. Even without that the plot was fast paced, captivating, a little predictable in some places, but the author wrote all of those scenes so well that I didn't care about it. The plot and the writing were outstanding!

And that ending killed me!! I never saw that coming at all, it was like a slap in the face. And the next books better have Juliette in it, because if they don't then that ending won't have enough closure for me. Anyway, I loved this ending!

Now lets talk about the bad qualities which mostly consites of one character, the people who read this will know who I am talking about. However, before I go into that let me talk about the rest of the characters. Lets start with Dr. Moreau. I thought this guy was awful and crazy and mad and I wanted him to just die, basically he was the perfect villain. He was one of the best villains I ever read. The trend in YA fiction now a days is villains that are in the gray. They aren't truly evil, they have their reasons and you can kind of sympathize with them on some levels. That is completely fine, I enjoy reading those characters, but Dr. Moreau wasn't like that at all. He was truly evil and you can't sympathize with him, what he did wasn't justifiable on any level. And I loved that. He is the definitions of a villain. It was great to read a villain like that.

On to the bad parts, oh, Juliet, where art thou brain. I always thought of myself as the kind of reader in which a character can't make or break a book. Juliet proved me wrong. I hated this girl. She was the most stupid, naive, idiotic, annoying character I have ever read. It didn't have anything to do with the writing, she was a well written character. I just hated her personality. She just made such dumb decisions. I was so frustrate with her that I couldn't enjoy the great creepy plot. I never encountered this before. I just wanted to slap some sense into her throughout most of this book!

The bad part doesn't fully consites of Juliet, it was also the love triangle. I wish the author just choose a guy and developed their relationship from there. Because both guys where great characters, but since Juliet's affections where split between them non of their relationships could grow.

Overall, this book had really awful parts to it and some great parts in it. I will read this second one when it comes out, to see where the plot will go. And I can't really recommend this book to you, if you are a reader who cares more about the plot, then maybe read this one, but if you have to have good characters in a book, then don't read this one.

That's my review, come back tomorrow for another Top Ten Tuesday.
Happy reading