February 19: Top Ten Favorite Characters In X Genre
this was a very hard one to do, not just to find the characters, but to find the genre. So, I end up picking a very broad genre, basically because I didn't have enough books from on certain genre to get ten characters. The genre I picked was Paranormal books. 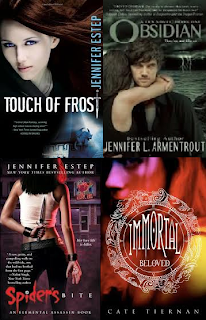 1. Gwen from the Mythos Academy series by Jennifer Estep.
Gwen is so brave, smart, such a nice person and so selfless. When she was on trail for her life she wasn't thinking about clearing her name, no she was trying to find out what the reapers plan was and stop it so no one dies. Who doesn't admire that?

2. Logan from the Mythos Academy series by Jennifer Estep.
Logan is just awesome. He's a great fighter and he would die to save his friends. I mean, who wouldn't like him?

3. Katy from the Lux series by Jennifer L. Armentrout.
I really like Katy, because she is so ratable. She not a character that's perfect and powerful, no she is the kind of heroine that you could see a real person being like.

4. Gin from the Elemental Assassin series by Jennifer Estep.
Gin is the person I want to be, not a bloodthirsty assassin, but a person that doesn't let themselves be played by a another person. And doesn't take crap from anyone. And never gives up, even when shes buried under a mountain.

5. Nastasya from the Immortal Beloved series by Cate Tiernan.
This character has been though so much in her life, but she's able to get past that and forgive a person that I would never forgive and she's a character that never gives up. 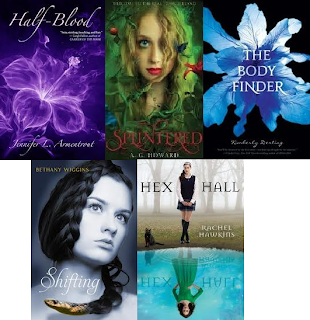 6. Alex form the Covenant series by Jennifer L. Armentrout.
Alex is another strong character that whenever she falls down she gets right back up.

7. Alyssa from Splintered by A. G. Howard.
I love how Alyssa was normal, but also had a wild crazy side that she doesn't really know about. And she's a great character to read.

8. Violet Ambrose from the Body Finder series by Kimberly Derting.
Violet is such a strong character and shes willing to risk her life to save a total strange from killers time and time again, and I really admire that.

9. Magdalen from Shifting by Bethany Higgins.
I don't really have much to say about this character besides I really like and admire her.

10. Sophie Mercer from the Hex Hall series by Rachel Hawkins.
Sophie has so much snark in her. She can't go ten minutes without saying a sarcastic remark. And she is just such a funny character.


Those are my picks, what are yours?
Happy reading
﻿