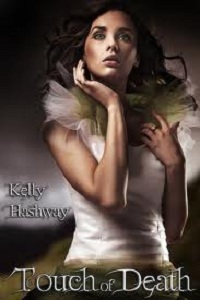 Jodi Marshall isn’t sure how she went from normal teenager to walking disaster. One minute she’s in her junior year of high school, spending time with her amazing boyfriend and her best friend. The next she’s being stalked by some guy no one seems to know.

Jodi’s deadly to the living and even more deadly to the deceased. She has to leave her old, normal life behind before she hurts the people she loves. As if that isn’t difficult enough, Jodi discovers she’s the chosen one who has to save the rest of her kind from perishing at the hands of Hades. If she can’t figure out how to control her power, history will repeat itself, and her race will become extinct.

So, I have wanted to read this book since before it came out. However, when it came out I started seeing very bad reviews about it so I didn't read it right away, but I still wanted to read it. So, finally last week I got the book on my Nook and I started reading it. My overall impression of it reminded me of a rollercoaster, not because my emotions where everywhere, but because it kept being bad, then started to get good, but wait.....it's still bad.

The beginning of this book was awful and the only reason I kept reading was because the concept of the plot was pretty good. Then it starting getting better and I started to really like it, but then it turned sour again.

So, like I was saying the beginning of this book had a lot of problems (so many problems). The first of which was that the summary of the book revealed so much of the plot. I've heard people complaining about how they hate it when the summary reveals to much, but I've never read a book where that happened before this one. The summary revealed the plot for the first 100 pages, that is almost half the book. I'm sitting there saying "okay I know this, can we move on".  The beginning would have been so much better if I didn't know everything already from the summary.

Another problem was how forced the plot felt in the beginning. Some things would happen to move the plot along that I felt would never happen in really life. Like, come on, a squirrel is going to run right under your feet right when you drop your hammer? That doesn't happen in real life. However, as the plot regressed it started feeling more and more natural.

Also, in the beginning the characters felt like plastic. They had no depth to them at all; it was like they were just there and nothing more. And they felt so distant; I felt no connection to any of them at all, not one single character.

The main character was the worst character in the whole book. She was so passive. I like characters that fight their own battles and think for themselves, but Jodi wasn't like that all. It's like someone tells her what to do and shes like, "Well I don't like it, but I'll do it anyway". It just annoyed me to no end.

I don't know what happened, but I figured out what was going to happen in the end way before Jodi did and there is nothing more annoying then knowing what is going to happen when the main character is clueless. And Jodi went back to her doesn't-think-for-herself-passive-self, but this time she added hypocritical to the list of how I described her. The plot went back to feeling forced. It was like all the bad things in this book went on break in the middle and came back because they were feeling guilty that they were neglecting there work.

With all that said you are probably wondering why I kept reading this. Well, I kept reading, because the concept of the plot was great. I knew it was a zombie book when I started reading this, but its not a zombie book where everyone gets infected and people have to survive the virus. That was my fear before reading this, I don't like those books at all, but gladly this book wasn't like that. However, this book was also an Greek Mythology book and I am a sucker for those books. I love them so much.

I will look out for more books from this author, because her writing style was good and you can tell that she loves writing from this book. I just won't read the rest of this series. Even though when I finished this book I was in the I-would-read-the-next-book-but-I wouldn't-go-out-and-buy-it category, but then I read that the next book is all about a love triangle. I mean the summary makes it seem like the whole plot is based off a love triangle.

All in all, even though it had a lot of problems the concept of the plot was good enough for me to keep reading, even though in the end I really didn't like this book. It has so many problems and I wouldn't recommend it. Which is sad, because you can feel the authors love for writing though this book.

2 Butterflies
Boring, not really my kind of book.

Don't forget to enter my 100 followers giveaway for a chance to win either Unravel Me or The Madman's Daughter.

Also vote on my "what to read next" poll on the left sidebar, if you haven't done that yet.


That's my review, I hope you liked it.
Happy reading