Warning! Do not read any farther if you have not read the first two in the series. There is SPOILERS.
Here are my reviews on the first two books, The Goddess Test and Goddess Interrupted. 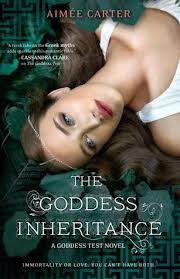 Love or life.
Henry or their child.
The end of her family or the end of the world.
Kate must choose.

During nine months of captivity, Kate Winters has survived a jealous goddess, a vengeful Titan and a pregnancy she never asked for. Now the Queen of the Gods wants her unborn child, and Kate can't stop her--until Cronus offers a deal.

In exchange for her loyalty and devotion, the King of the Titans will spare humanity and let Kate keep her child. Yet even if Kate agrees, he'll destroy Henry, her mother and the rest of the council. And if she refuses, Cronus will tear the world apart until every last god and mortal is dead.

This review will most likely be short, because I have nothing really to say but WOW. Aimee Carter did something I though was impossible. She not only made a series in which every book gets better the farther you go into the series. She made the last book the best in the series. That has never happened to me before and I thought it was impossible, but she did it.

I have a weird thing that I have been trying to get rid of and that is I judge a book series, a movie, or a TV series on the last instalment. If a book series is really good, but the last books sucks I will either A, pretend that the last book doesn't exist and only focus on the books before it. Or B, if the series was only good and the last books was bad I will just hate the series and never think about it again. So, when I saw that I got approved for this ARC I was both very excited and very nervous, because I was afraid that I would hate this book and A or B would happen. However, this book blew me AWAY.

The word that I would use to describe this plot would be intense. The first three chapters are full of action and suspense and things that make you cry and that is a hard feet to do for me. Then after those first three chapters it starts to slow down and you think its going to go one way. Then BAM Aimee Cater takes the rug right underneath you and turns what you think was going to happen to dust. And throws in another three chapters full of action tears and suspense. Just repeat that for the rest of the book and you got the final book in the Goddess test series.

The only problem I had with this plot was that sometimes the plot was moving a little to fast and I my head would start spinning trying to remember what Kate's and every one's plan was. I also feel the need to warn you that since there is war in this book people die and I who died I didn't think would die. Just a warning.

"I love you Kate" He murmured, "Even if you are frustratingly good sometimes"

That quote explains my relationship with Kate. I really like her character, because she is the most compassionate, caring, understanding, forgiving character I have ever read, but sometimes her martyr complex got on my nerves. I like a characters that will stand up and fight, not lay down and die hopping that it will save everyone else. However, I was fine with it this time, because even though it did annoyed me and it made me want to go into the book and slap some sense into Kate, it fits Kate's character. It didn't feel forced, she is just the person who would die to keep everyone else alive.

All in all, Aimee Carter holds nothing back in this thrilling and captivating conclusion of the Goddess Test series that keeps you on the edge of your set throughout the whole book. Even though I am sad to see this series go, it went in the best way, because this book was the best in this series. And if you haven't read this series yet, then do so now, because it is a great series.

Recommend if you like: The Goddess Test series and Greek Mythology.

Thanks again to Harlequin for letting me read this one early :).
Happy reading.