Review: Take Me On by Katie McGarry 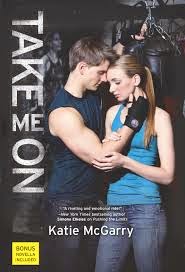 Acclaimed author Katie McGarry returns with the knockout new story of two high school seniors who are about to learn what winning really means.
Champion kickboxer Haley swore she'd never set foot in the ring again after one tragic night. But then the guy she can't stop thinking about accepts a mixed martial arts fight in her honor. Suddenly, Haley has to train West Young. All attitude, West is everything Haley promised herself she'd stay away from. Yet he won't last five seconds in the ring without her help.
West is keeping a big secret from Haley. About who he really is. But helping her-fighting for her-is a shot at redemption. Especially since it's his fault his family is falling apart. He can't change the past, but maybe he can change Haley's future.
Hayley and West have agreed to keep their relationship strictly in the ring. But as an unexpected bond forms between them and attraction mocks their best intentions, they'll face their darkest fears and discover love is worth fighting for.

I am in love with the Pushing the Limits series like so many other readers. So I of course I read this one as soon as possible. I loved this book! It was another great, touching, emotional love story that was just so cute and serious. Crash Into You is still my favorite book of this series, but this one is a very close second.

This story follows West, Rachel's brother, and a girl named Haley who has been through some tough stuff. West is in a terrible place because Rachel was just in her accident and he blames himself. By blaming himself he goes in a spiral of self-loathing about how he always fails, in his mind. Haley has a very tough life and her family can beat Rachel's for the most dysfunctional, which I didn't think was possible. Her father lost his job so they moved into her Uncle's house who is emotional abusive. Added to that is the fact that a few months earlier she was in an abusive relationship, so she is also in a very dark spot emotional and physically. This book overlaps Crash Into You. Rachel was just put into the hospital, so for most of the book it is set in the time we didn't get to see in Crash Into You.

I loved West's and Haley's relationship, because they made each other stronger. This story, like Katie McGarry's other ones, is about coming into your own, moving past some stuff and growing stronger. West needs to figure out his life and get over thinking he is failing everyone and Haley needs to get through her emotional trauma. Both West and Haley helps the other get through their messes and were their for each other. It was just so great to read about their relationship developing and that being what helps them through their lives and/or gives them the motivation to face things and stand up for herself  themselves. They were also so cute and great together.

The characters were, as usual, great! They had a lot of depth and so much character growth in this book. Katie McGarry wrote all of them so well, she also did a fantastic job at writing the dysfunctional families. Like I said before, Haley's family was so dysfunctional and I hated almost every single one of her relatives. (Rant starting) She gave up on herself and everyone followed suit. Her father no longer stood up for his own daughter, her bother and cousin who say/said they had her back treated her awfully just because she withdrew into herself. When she started keeping to herself they got mad at her for keeping things from her and blamed her for something I didn't understand. I just got mad at them for not thinking outside of the box and saying "hey something most of happened to her for to be like this" instead of just being mad at her. And don't get me started on the Uncle. (Rant End).

One thing that annoyed me was how West would sit there and think about how his family doesn't understand him and they don't like him. This annoyed me because 'hello you have Rachel, she loves you. You have Ethan, your brother". But then I realized that he was talking more about his parents then his siblings.

Overall this was another great love story from the Pushing the Limits series. I loved it, I loved the characters, their stories, West's and Haley's relationship, I basically loved everything but how West thought of his family.
I still like Crash Into You and Rachel & Isaiah better, but this one and West & Haley are close seconds.