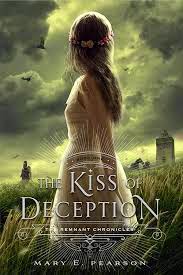 A princess must find her place in a reborn world.She flees on her wedding day.She steals ancient documents from the Chancellor's secret collection.She is pursued by bounty hunters sent by her own father.She is Princess Lia, seventeen, First Daughter of the House of Morrighan.The Kingdom of Morrighan is steeped in tradition and the stories of a bygone world, but some traditions Lia can't abide. Like having to marry someone she's never met to secure a political alliance.Fed up and ready for a new life, Lia flees to a distant village on the morning of her wedding. She settles in among the common folk, intrigued when two mysterious and handsome strangers arrive—and unaware that one is the jilted prince and the other an assassin sent to kill her. Deceptions swirl and Lia finds herself on the brink of unlocking perilous secrets—secrets that may unravel her world—even as she feels herself falling in love.

I am a huge fantasy fan. So I was super excited to read this one when it released. A fantasy book about a runaway princess with a Prince and an Assassin after her, hell yes! I was not disappointed a bit. This book was an enjoyable fantasy book that is mainly a love story, but also a story about what it means to be a leader, and sacrifice.

This plot never lost my attention. While some people might find the first half a little boring since it is basically about Lia running away and putting down roots in a village and falling for two guys who are the Assassin and the prince, I never lost interest. This may be because I love love stories and this one was done so well. It was balanced between the romance and Lia finding herself. It also may be because it had an undertone of mystery and suspense because we aren't told which of the two guys are the assassin or the prince. So it's a guessing game. This mysterious aspect is reinforced by the writer adding short chapters here and there from the Assassin's POV or the Princess POV and then from Rafe's POV or Kaden POV without ever telling us who is who. It was really fun to try and guess who was who before the final reveal and if I may add, I guessed right. The suspense came from waiting for when the Assassin's time ran out and her had to kill her and seeing what he was going to do.

When the 300 page came the action picked up. The plot took a complete turn-around and it was so freaking good!! It was done at the perfect time. It gave enough time before hand to develop the relationship between Lia and the guy so liked, so when she was pinning for him I could get behind it. And it was done before I got bored with the plot.

Now I want to talk about something.....strange about this book. When reading the first half I noticed that it had this leisurely tone to it, which matched the pace and the plot. However, when we got to the 300 page mark, when things got a little crazy, this tone was still there. So all this actiony stuff was happening and I got into it, but the tone stayed the some. This didn't hinder reading the action scenes, it just made the book more unique.

I really liked the romance in this book, which is great since it was a big part of the book. I liked how it wasn't a love triangle even though there was two guys. She preferred one guy over the other and their love blossomed. I also liked how it wasn't love at first, it was curiosity and compatibility that drew them together and their relationship developed. It wasn't like she was saying she loved him after knowing him for a week. Their love grew over time and that gave so much depth to their relationship and made me able to get behind this romance.

Also, one last thing. I am in love with this woman's writing style. It was so beautiful!! It was poetic in some points and it was just addicting. And when she explained the world I could see, hear, and smell it so vividly! She is such a great author and she was amazing at the world building!

I really enjoyed this book! I thought it was a great starting point to this series. I thought the writing was outstanding! The plot was a great start to this series. It felt like it's own plot and the next books are just the continuation of that plot, instead of it just setting up for the next books. And if you think you would get bored of this plot I would suggest still giving it a try, because the plot does it actiony and with that ending you can tell that the next books will be full of action.

Recommended if you like- Love stories, fantasy, and/or Emotional finding yourself books.