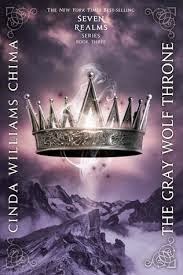 Han Alister thought he had already lost everyone he loved. But when he finds his friend Rebecca Morley near death in the Spirit Mountains, Han knows that nothing matters more than saving her. The costs of his efforts are steep, but nothing can prepare him for what he soon discovers: the beautiful, mysterious girl he knew as Rebecca is none other than Raisa ana’Marianna, heir to the Queendom of the Fells. Han is hurt and betrayed. He knows he has no future with a blueblood. And, as far as he’s concerned, the princess’s family as good as killed his own mother and sister. But if Han is to fulfill his end of an old bargain, he must do everything in his power to see Raisa crowned queen. Meanwhile, some people will stop at nothing to prevent Raisa from ascending. With each attempt on her life, she wonders how long it will be before her enemies succeed. Her heart tells her that the thief-turned-wizard Han Alister can be trusted. She wants to believe it—he’s saved her life more than once. But with danger coming at her from every direction, Raisa can only rely on her wits and her iron-hard will to survive—and even that might not be enough.The Gray Wolf Throne is an epic tale of fierce loyalty, unbearable sacrifice, and the heartless hand of fate.

I am in love with this series so far! The first two where really great and I loved where the plot went. So, I started this one right after finishing the second and thoroughly enjoyed this one as well. All the aspects that made the first two great carried over to this one and it was such a great book!! However, there are two things that I had slight problems with.

This plot starts off right were the second one left off. Rai is making her way to the Fells after escaping from The Bayers. Han is also making his way back to the fells looking for Rai. The summary promises us that Han saves Rai and then learns her true identity. The first problem I had with this book is that it took the first 130 pages to get to this part. You had to read 130 pages so you can get beyond the summary. I hate when publishers do this! I know this isn't the writer's fault, it's the publishers, but it really hindered my reading experience.

Since the first 130 pages were from the summary it took that long for me to get into it, but once I got into it I couldn't get out of it! After the 130 page mark I just got swept into this world and it's politics! The plot was just so fast paced that I finished this after three and a half days, which is great for a 500 paged fantasy. However, looking back nothing much happened. It kept my attention, but there weren't that many significant events that happened and overall the plot felt like a set-up for the last book. I can tell you in one or two sentences all that happens in this book. This is a little weird considering how addicted I was to reading this book. Although, I will say that besides the fact that this plot felt like a set-up it didn't leave it wide open for the next one. The author just left subtle hints and clues as to what the twist and turns and the overall plot will be in the last one instead of spelling it out for us.

The characters were just as likable as before and I was rooting for Rai and Han the whole way through. I really hope though that Han's and Rai's interests keep coming together, because she has so many people who have different interests then her who try to influence her and she needs someone who will support her.

The romance was okay. I really like Han and Rai together, I think they are perfect for one another and are just cute together! However, I really wish the  last book touched more on their relationship. Their relationship really bloomed in the last one and was developed in it too, but I really wished it didn't skip over those two months they were together. I know I can't call it insta-love since they were together two months, but since it only gave us a brief overview of those months it feels like insta-love. So when they reach a bump in the road that is her reveling that she's the princess, I couldn't get behind it because it felt like insta-love. However, the troubles their relationship goes through did help make it feel less like insta-love because of the complications and the pinning for one another.

Overall I highly enjoyed reading this book! The cast of characters were just as good as before and I like how the author shows all the sides of the politics. I also like how everyone, and I mean everyone, has their own agenda and Rai has to deal with that. And while I would have liked more significant things to happen in it and the plot to feel less like a set-up I was still addicted to reading this book.

-Recommended if you like-
The Seven Realms series
Fantasy
Magic books