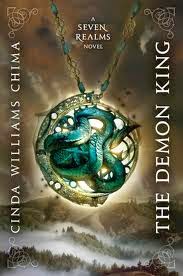 One day Han Alister catches three young wizards setting fire to the sacred mountain of Hanalea. Han takes an amulet away from Micah Bayar, son of the High Wizard, to ensure the boy won’t use it against him. The amulet once belonged to the Demon King, who nearly destroyed the world a millennium ago. With a magical piece so powerful at stake, Han knows that the Bayars will stop at nothing to get it back.
Meanwhile, Princess Raisa ana’Marianna has her own battle to fight. She’s just returned to court after three years of riding and hunting with her father’s family. Raisa aspires to be like Hanalea, the legendary warrior queen who killed the Demon King and saved the world. But it seems that her mother has other plans for her—plans that include a suitor who goes against everything the Queendom stands for.
The Seven Realms will tremble when the lives of Han and Raisa collide in this stunning page-turner from best-selling author Cinda Williams Chima.

So, for a while now I have been on a fantasy kick and this one was one top of my TBR because I've heard nothing but praise for this one. However, I was a little wary because fantasy books can so easily be done wrong, but thankfully I had nothing to worry about. This book was everything it said it would be and more! It was full of mystery, romance, intrigue, politics, magic, destiny and so much more! I thoroughly enjoyed every minute of reading this book.

This book starts out with two stories, the story of Han Alister and his struggle to feed his family and live, then there's the princess Raisa and her life in court and politics. These two stories coincide with one another for the whole book, even though they met only once in this book. I love this aspect of this book because I just love books that have two stories that impact each other and intertwine with one another and the author wrote it so well! I applaud this author for her layering of this plot, layering that I hear only gets better as the story progress.

Speaking of this plot, it was great to read! It kept me entertained and never lost my attention. However, there are a few slow parts in this book. It is the first book in a series so the story and world needed some build up before the story really got off. So the first half was on the slow side, but the last half is when everything started connecting and stuff really started to happen. Even though the first half was a bit slow I was still really interested and invested in the story because of the world and the great writing.

The world in this book was so well developed and brilliantly written!! I loved it and the tension the author created between each class. In this world there are four main types of people. There are the Clan who live in one portion of the kingdom and they live like Indians, they sleep in tents they were animal skin, ect. Then there's the city people, people who live in the city and are mostly poor. The noble men who are nobles. Finally, there's the wizards who have lots of influence to the Queen and the kingdom. I loved how each class of people hated the others in there own ways and most of the time they disliked each other just because of rumors and societal expectations. It was just so enjoyable to read about the tension between each class and the potential for war. It was just such a great, but not great, world!!

The characters are one of the few things I didn't like about this book. It's not like they were bad, I really liked Han and Raisa, but I just didn't feel connected to them. This could be because it's a first book in the series or something else, but I just didn't feel that connected to them as people even though I loved reading there stories. It's weird I know. Also, don't think it's because they weren't well written, they were. They had a lot of depth and a lot of growth, I just couldn't get connected to them. Also, side note, I felt like how Han was portrayed to readers when reading in his POV was so different then how he was when he was being seen through another's eyes. In hindsight this is actually really realistic because no one is how they seem to other people, but it just felt weird when reading it.

Overall this story was very enjoyable and fun to read. I just love fantasy books that have court politics and intrigue and if you combine that with magic and tensions between classes I am sold. It was also extremely well written and I love where the plot is going! I would highly recommend this to any fantasy lover or to anyone really, because it isn't an epic fantasy so it's really easy to get into the world.