Top Ten Characters Who X (you fill in the blank -- examples: piss me off, are the popular kids, are bookish, would be my bff, that stole my heart, etc. etc.)
I am choosing top characters who grew. Which means the top ten characters that I feel had the best character arc or character development in their respected books/series.

Rachel from Crash Into You by Katie McGrarry
In the beginning of this book Rachel was a good person who is brave and smart. However, she never really stood up for herself, especially to her family who were jerks. And as the book progressed she learned that sometimes you need to stand up for yourself or else you will be stuck with the same problems. Iyt was gret to see this development from her.

Juliette from the Shatter Me by Tahereh Mafi
A lot of people find Juliette annoying and so do I to some extent, however, the amount of how much she grows throughout this series really eclipse that. At the beginning of this series she started out as the victim and as the series progresses she realizes that she still is a victim and she no longer wants to be. She gets so strong throughout the whole series.

Vin from the Mistborn series by Brandon Sanderson
Vin starts out as a survivor. She knows when to flee, when to be invisible, when to suck it up and take to punches which are all very good things to know but it results in a very sad life. It means she doesn't trust anyone and she doesn't have any friends. As the first book goes she realizes what she is missing and how friendship means you are loyal and you don't leave them behind.

Meg from Going to Far by Jennifer Echols
Meg really learns who she is in this book. At the beginning she is really confused at who she really is because all this crap happened in her life. This book is really about her figuring herself out and deciding who she wants to be and who she doesn't.

Isra from Of Beast and Beauty by Stacey Jay
This character arc is almost the same as Elisa's. Isra in the beginning of this book wants to be a good queen, she wants to protect and make society better for her people. However, she doesn't realizes how to do this. She asks instead of orders and at the end of this book she grew into a fierce queen who people should respect.

Elisa from the Girl of Fire and Thorns by Rae Carson
Elisa starts out this book series as a person low on self-confidence. She doesn't believe she is smart, beautiful, or anything that would make a good queen. However, throughout this book she realizes she is a queen and she needs to be a queen. She gains some self-confidence and basically becomes a queen. This was just amazing to read!!

Tris from Divergent by Veronica Roth
This is an obvious one. Tris grows so much in the first book, I don't know about the rest of them since I've only read the first one. However, there was a lot of development in her character in the first one. What I really love about this character arc, at least where the first book is concerned, is that she grows so much because she never before had an opportunity to. Before the events in this book she never had a chance to grow as a person and it's amazing how much she did grow when she was finally given the chance.

Ana from Incarnate by Jodi Meadows
Ana has been continuously told that she's worthless and doesn't deserve anything like happiness and a place in society her whole life. Not just by her mother but also by everyone it seems. What was just really sad was at the beginning of this book Ana believes all of that. So it was really great to see her go from a broken shell who wants a good life but doesn't believe she can get it to a strong independent woman who fights for herself and what she believes is right. 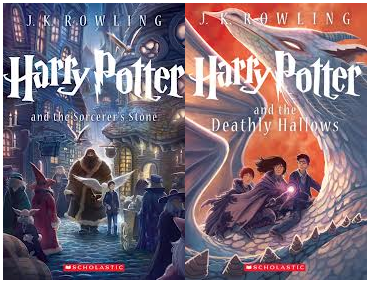 Harry Potter from the Harry Potter series by J. K. Rowling
Harry has an amazing character arc but also a very different one. It's not like he grows as a person in the aftermath of a horrific event, he doesn't move on from grief, or anything like that. In these books we get to see him grow to adulthood and all the bumps and mistakes it took him to get there. We read him making mistakes and learning from them, we saw him go from an eleven year-old with his heart in the right place to a kind man that you do not mess with. I don't think I will ever read a character arc as great as Harry's.

That's my Top Ten, what was yours?
Happy reading