Okay, so this is my first Top Ten Tuesday in a long while. I don't know why I stopped doing these, because I love this meme, but I'm starting to do them  again.

I chose.
-Fantasy-
By fantasy I mean any kind of fantasy, not just YA fantasy or Adult Fantasy. I mean the genre as a whole. 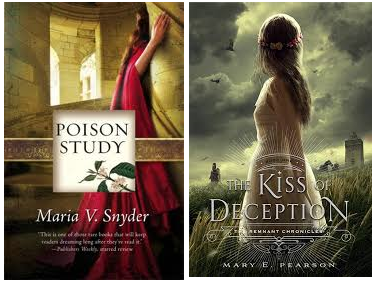 -Poison Study by Maria V. Snyder-
This is one of my all time favorite books, ever. I love it and I feel it's a really good introduction to the genre. The world isn't to intense, the plot isn't to super intricate, the writing is wonderful, and the world building is done to well that never are you info dumped but at the same time confused on what going on in the setting. The characters are also very real and likable so you are invested in the story.

-Kiss of Deception by Mary E. Pearson-
This one, to me, feels like a fantasy and contemporary hybrid. It's set in a fantasy world with princesses, princes, and assassin's but the plot is a lot about the main character finding her place in the world. It focuses a lot on the MC's character development and her life problems and her love life. However, it is also highly about the political unrest of this world. So, there's a nice balance between the two genres.The world building is also amazingly done and you can visualize everything with perfect clarity. 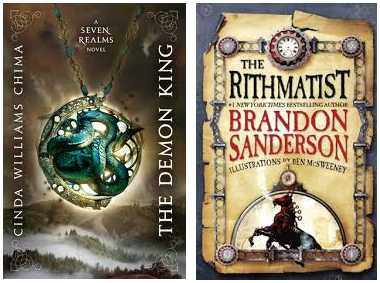 -The Demon King by Cinda Williams Chima-
This is where the plot gets intricate. I'm not yet finished with this series, but I can tell that the overall plot is intricate and everyone is connected. This one has two main characters, but everyone kind of feels like a main character. Everyone has a story and a life and everyone's life connects and impacts the other people's lives. This may sound complicated, but the author wrote it in such a way that it really isn't when you read it and everything flows together. So, if your hesitant to reading fantasy because of plots like this, I suggest reading this one to see how great these plots can be, because it's a great transition in.

-The Rithmatist by Brandon Sanderson-
So, this one isn't really a fantasy. It's much more a historical fiction, but I consider it fantasy because it feels like a fantasy book. It's set in a time frame that's reminiscent of the early twentieth century in America, but it has different technology, the geology of America is way different, the government is completely different, and it has Rithmatists (magic). All of these makes it feel like a fantasy book. I feel like this is  good first fantasy because the author explains in much detail about Rithmatists, it's history, and how they are able to do it. So, you are never confused on anything about Rithmatists and the world's society with them. 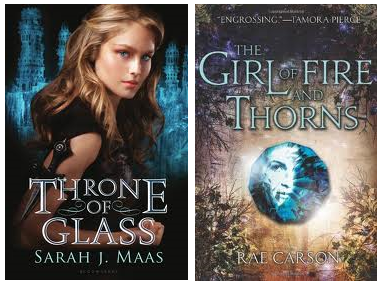 -Throne of Glass by Sarah J. Maas-
This book has everything in it! It has a kick-butt main character, a great plot, an outstanding world, and fantastic writing! What really wonderful about this book is the world building. The author is just so good at introducing readers to this world. First you're just told about a place, then somewhere along the way your shown it and all of these other faraway places are explained to you. So, this world gradually becomes more and more fleshed out until it feels like a real place. The Author put so much time and energy on developing this world, making up towns and places, and explains it that it feels like I can hop on a plan and go there. Not to mention the plot is super great and gradually gets more and more layers added to it. I would recommend this book to anyone.

-The Girl of Fire and Thorns by Rae Carson-
This book is just so well written. All of the characters have depth to them, the MC's problems are relateable even though she's a Queen, and the world is very well written. The only thing is that this book has a touch of religion to it, but if that isn't your thing don't let it stop you from read this because it's so much more then the religious aspect. 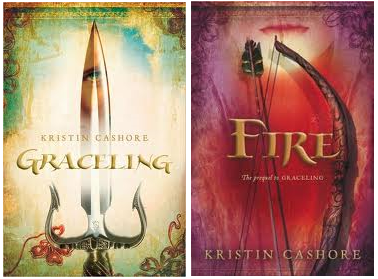 -Graceling and Fire by Kristin Cashore-
These are slower paced books. The author really takes her time to set up the world, to explain about the Gracelings, flesh out the characters, and develop the world. However, you don't get bored. They still have plots to them, plots that are addicting to read about! They are just so good and easily read that I would suggest them to newbie fantasy readers and experienced fantasy readers. 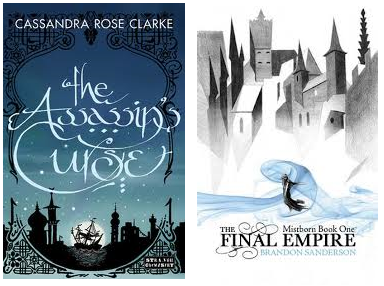 -The Assassin's Curse by Cassandra Rose Clarke-
This fantasy is one of the most adventurous fantasies next to LOTR. It's this big adventure and you get to see all of the exotic places that this author imagined and wrote so well. The plot is really fast paced, so you'll finish it in mere hours. It also has a romance that is just so subtle, slow building, and cute!

-Mistborn by Brandon Sanderson -
So, this one is on the longer side and is probably better explained has high or epic fantasy. I think this is a good one to get into that fantasy sub-genre because it is just so good!! Everything about it is just wonderful! The setting was so well written and amazing to read about because it came alive in your mind's eye, They are themes in this that impacted me as a person, and the characters are just so realistic.This author can also create a tone of a book. This book is depressing, but still great, to read with it's messed up world, people that have given up on life, characters dying left and right, people trying to inspire others to fight, it just makes you feel all of the emotions! And the magic system in this world was extremely well thought out! The author did a wonderful job explain and visualizing how alloymancy works. And while it's long, the plot is fast paced and never slows down.