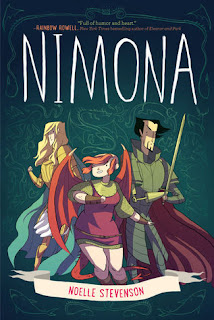 The graphic novel debut from rising star Noelle Stevenson, based on her beloved and critically acclaimed web comic, which Slate awarded its Cartoonist Studio Prize, calling it "a deadpan epic."

Nemeses! Dragons! Science! Symbolism! All these and more await in this brilliantly subversive, sharply irreverent epic from Noelle Stevenson. Featuring an exclusive epilogue not seen in the web comic, along with bonus conceptual sketches and revised pages throughout, this gorgeous full-color graphic novel is perfect for the legions of fans of the web comic and is sure to win Noelle many new ones.

Nimona is an impulsive young shapeshifter with a knack for villainy. Lord Ballister Blackheart is a villain with a vendetta. As sidekick and supervillain, Nimona and Lord Blackheart are about to wreak some serious havoc. Their mission: prove to the kingdom that Sir Ambrosius Goldenloin and his buddies at the Institution of Law Enforcement and Heroics aren't the heroes everyone thinks they are.

But as small acts of mischief escalate into a vicious battle, Lord Blackheart realizes that Nimona's powers are as murky and mysterious as her past. And her unpredictable wild side might be more dangerous than he is willing to admit.

Recently I've been getting into graphic novels and when I saw this one I had to get it. It was about a feisty shapeshifter, a conspiracy from the villains POV, and art; all put together in 300 pages. I will not lie, besides the plot the fact that this was a graphic novel that had almost 300 pages also swayed me to buy this one.

This Graphic Novel started out very simple, it had a simple plot, seemingly simple characters, and simple, anti-subtextual dialogue. However, I think that's where the brilliance of this novel really comes from because as the story progresses the plot becomes more complex, the characters are shown in a more complicated way like they are in fact people, the dialogue develops so it isn't so simplistic. The whole book grows and develops, not just the characters, and that brings you closer to the book and give you such a rewarding reading experience.

The plot was very interesting to read. It kept me interested in what was going to happen and what the characters were going to do, even though it was slightly predictable. I really loved how we got to see everything from the villain's POV because it made it feel much more unique and different. It also allowed us to really appreciate the characters because it highlighted the goodness and evil in everyone. It allowed the readers to see the goodness in the "villain" and the faults in the "hero".

The best thing in this whole story was the character depth the author slowly added. I don't necessarily want to say character development even though this story contained a lot of that because it was very focused on the emotions of the characters and whatever pain they had previously experienced. This was really highlighted by how the story slowly introduced the characters depth, as I previously stated because it allowed the reader to appreciate it much more.

Now, the final thing I would like to talk about is Nimona. She was one of the best characters I've read  and the fact that this was achieved in a graphic novel where character depth is a lot harder to achieve is so impressive. Her story goes from fun and silly to tragic in a heartbeat.  That is all I want to say about her because I think one reason her story was so impacting to me was because I didn't expect it.

Verdict: Read this graphic novel! It is the perfect for getting into the Graphic Novel genre and will still be enjoyable to veteran readers. It is also relatively cheap (at least for me) and I'm still impressed it almost had 300 pages because that is almost unheard of for graphic novels.