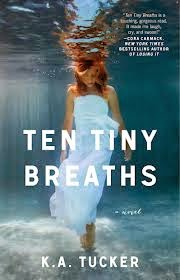 Kacey Cleary’s whole life imploded four years ago in a drunk-driving accident. Now she’s working hard to bury the pieces left behind—all but one. Her little sister, Livie. Kacey can swallow the constant disapproval from her born-again aunt Darla over her self-destructive lifestyle; she can stop herself from going kick-boxer crazy on Uncle Raymond when he loses the girls’ college funds at a blackjack table. She just needs to keep it together until Livie is no longer a minor, and then they can get the hell out of Grand Rapids, Michigan.But when Uncle Raymond slides into bed next to Livie one night, Kacey decides it’s time to run. Armed with two bus tickets and dreams of living near the coast, Kacey and Livie start their new lives in a Miami apartment complex, complete with a grumpy landlord, a pervert upstairs, and a neighbor with a stage name perfectly matched to her chosen “profession.” But Kacey’s not worried. She can handle all of them. What she can’t handle is Trent Emerson in apartment 1D.Kacey doesn’t want to feel. She doesn’t. It’s safer that way. For everyone. But sexy Trent finds a way into her numb heart, reigniting her ability to love again. She starts to believe that maybe she can leave the past where it belongs and start over. Maybe she’s not beyond repair.But Kacey isn’t the only one who’s broken. Seemingly perfect Trent has an unforgiveable past of his own; one that, when discovered, will shatter Kacey’s newly constructed life and send her back into suffocating darkness.

I have heard nothing but praise for this book and because of that I was terrified to read this book. It seems that whenever I read a very hyped up book I get severely disappointed. I also don't really like contemporary books in general and I rarely find one that I really love. Needless to say, I was afraid to read this book and in the end I wasn't completely disappointed, but I wasn't blown away. This book was good and enjoyable, but I didn't think it was as amazing as I hoped it would be.

To start off, I really enjoyed the plot. It was fast paced and very addicting! I think I read this book within a day because of how addicting it was! However, I wished this book had more to it. It felt like it could have benefited from another 50 or 100 pages added to it. It just felt too fast and very rushed and that really took away from the book.

The part that I really loved about this book was the emotional aspect that it had. This really surprised me, in a good way, because I just thought that this was a love story and when I started reading this emotional undertone I feel in love with it. I just loved how it added so many layers to the story and really made it this gritting and haunted story. The main character was really emotionally messed up and that added so much to her character and the story. However, this was another aspect of the story that would have benefited from the book having more pages. I just felt that this part of the story was speed through and resolved way too quickly for me to like.

Now I want to talk about the thing I really didn't like about this book and that was the romance. To put it bluntly, I hated the romance in this book. Why I hated it so much was because it was the whole "Strong girl who doesn't need a guy but as soon as she sees the main love interest she falls apart and doesn't know how to act" troupe. As soon as Kacey meets Trent she literally falls apart and gets all awkward because *swoon* his eyes are so pretty. Also, it seemed that their relationship was built on lust and nothing else. It took them forever to even get to know each other and that was after they fell in love. After a while, however, I did start to like the romance, but right when that happened the big reveal was, well, revealed and then I really did not like Trent at all. I understand they were in love, but some of the things he did I don't think I could forgive.

Overall, I enjoyed this book very much. It was very fast-paced, I really liked the characters, and I really loved the emotional aspect that was in it. However, there was some aspects that I didn't really like, the biggest one was the relationship troupe. I would recommend this book to any lover of contemporary because it was quite enjoyable to read and there is a chance that you will like this romance much  more than I did.