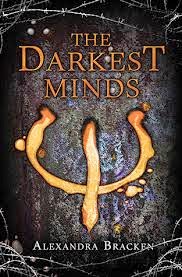 When Ruby woke up on her tenth birthday, something about her had changed. Something alarming enough to make her parents lock her in the garage and call the police. Something that gets her sent to Thurmond, a brutal government “rehabilitation camp.” She might have survived the mysterious disease that’s killed most of America’s children, but she and the others have emerged with something far worse: frightening abilities they cannot control.
Now sixteen, Ruby is one of the dangerous ones.
When the truth comes out, Ruby barely escapes Thurmond with her life. Now she’s on the run, desperate to find the one safe haven left for kids like her—East River. She joins a group of kids who escaped their own camp. Liam, their brave leader, is falling hard for Ruby. But no matter how much she aches for him, Ruby can’t risk getting close. Not after what happened to her parents.

This book series is really big right now and it seems everyone who has read it has loved it to infinity and beyond. However, It took me a long while to gather up the courage to read this one because the premise sounded interesting, but often when I read really hyped up books I get really disappointed. That is why I was putting off reading this and now that I've read it I wish I read it sooner. This book was really great and I wasn't disappointed at all! The characters were great and relateable, the growth of these characters throughout the book was beautifully done, the world was very interesting, and the plot kept you on your toes the whole time.

This book starts out with our main character Ruby in what is basically a concentration camp and she's been in it for (I think) 6 years. She like many other children were affect by this disease that went through America. This disease only affected children and any child that didn't die from it got these powers, some could move objects, some could control fire, ect.  The government were afraid of these children so they gathered up most of them and brought them to these camps were they are basically prisoners. It is a lot more complicated then that because the government says these camps are to "cure" these children so most of the population doesn't know how horrible these camps are and some parents didn't allow the government to take their children but the government did anyway.

So one of the first things I noticed about this book was the fact that the world isn't black and white. Not everyone "fighting" for the children are good, not every child is good, and some people do horrible things just to survive. There isn't a clear line of whose bad and whose good, all there is is the fact that most of the children aren't horrible, merciless human beings the government thinks they are. I love this fact because it makes you think about it and makes you support these kids even more since it seems no one is really advocating for these children.

The characters were beautifully written! They had flaws and sometimes they acted without thinking and they felt human and real. They had depth to them and they seemed like a real life person. The character development was also incredible! I didn't realize this until the end when I noticed how different Ruby was. If you compared Ruby from the beginning to this book to Ruby at the end they are almost completely different. And the fact that I didn't noticed that until the end is a testament to how subtly and fabulously it was done.

With that being said, for some reason it took me quite a while to get connected to this story and the characters. At the start I didn't really feel a connection to any of the characters, I admired them (especially Ruby) but I didn't have an attachment to them. However, as the book wore on the more and more I did get connected and attached. By the end of the book I was crying for the characters (You know which one) because I didn't want them to die and to keep on being in pain. Gah!! Feelings!

The plot in this book coincided with my connection with the characters. At first I wasn't invested in the plot, even though it kept up a good pace. I wasn't at the edge of my seat, I didn't stay up late reading it. However, the more I read and got connected to the characters the more invested I was in this story and, again, by the end I couldn't stop reading it!

Now that I've ranted about how much I enjoyed this book I need to explain why this book is only getting 4 Butterflies. Toward the end of this book I was in love, with the characters, the writing, the plot, almost everything. However, after finishing this book I realized I wasn't blown away by it. My thoughts didn't obsesses over it after finishing it, I didn't immediately go buy the sequel. I thought it was great and highly enjoyed reading it but I didn't love it.

Even with that being said I would highly recommend this book. It was great first book with fantastic characters and a fast paced, keep-you-on-your-toes plot, and a very unique and interesting world.