Review: The Well of Anscension by Brandon Sanderson 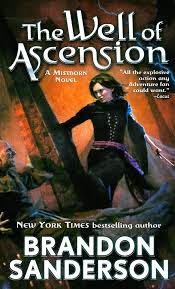 The impossible has been accomplished. The Lord Ruler – the man who claimed to be god incarnate and brutally ruled the world for a thousand years – has been vanquished. But Kelsier, the hero who masterminded that triumph, is dead too, and now the awesome task of building a new world has been left to his young protégé, Vin, the former street urchin who is now the most powerful Mistborn in the land, and to the idealistic young nobleman she loves.As Kelsier’s protégé and slayer of the Lord Ruler she is now venerated by a budding new religion, a distinction that makes her intensely uncomfortable. Even more worrying, the mists have begun behaving strangely since the Lord Ruler died, and seem to harbor a strange vaporous entity that haunts her.Stopping assassins may keep Vin’s Mistborn skills sharp, but it’s the least of her problems. Luthadel, the largest city of the former empire, doesn’t run itself, and Vin and the other members of Kelsier’s crew, who lead the revolution, must learn a whole new set of practical and political skills to help. It certainly won’t get easier with three armies – one of them composed of ferocious giants – now vying to conquer the city, and no sign of the Lord Ruler’s hidden cache of atium, the rarest and most powerful allomantic metal.As the siege of Luthadel tightens, an ancient legend seems to offer a glimmer of hope. But even if it really exists, no one knows where to find the Well of Ascension or what manner of power it bestows.

I am in love with this series!!! Completely and utterly in love with the characters, the world, the plot, everything in this series is amazing!! This book blew me away!! It was an amazing sequel. It improved on everything Brandon Sanderson wrote and developed in the first one. It captivated me, it enchanted me and it put me on a rollercoaster of emotions.

One of my favorite things about this series is the world. He writes the world so vividly that you can see the red rays of the sun, feel the coldness of the harsh winter, and taste the falling ash. On top of that is the tone to it. The sadness, horribleness, and just plain depressing feel of the world bleeds into the tone of the book. These books all have this really depressing tone to them. You feel sorry to the character who have to live in this godforsaken world.

The only real problem I had with this book was the plot. I know most fantasy plots aren't always constantly fast-paced and that was the case for this one. Don't get me wrong, in he beginning this plot kept my attention, however, it just wasn't always fast-paced. At the beginning, what grabbed me was the world and the urge to know what was in store for the characters. However, the plot did take off after the beginning of the book and when it did it soured. So many things were happening at once. There was another twist around every turn and I just couldn't put this book down!!

This didn't really bother me that much, because until the plot really took off, world building, character development, and learning about this world's past filled the plot's space.

This was an outstanding continuation of the series. It gave us so much character development and world building! You get more information about the Deepness and 'The Hero of the Ages" and life before the Deepness it's amazing!! This book series will just captivate you, make you fall in love with the characters, and then make you cry your eyes out because apparently characters can't live past 1 book.