Review: Of Beast And Beauty by Stacey Jay 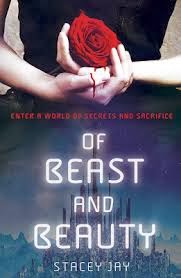 In the beginning was the darkness, and in the darkness was a girl, and in the girl was a secret...
In the domed city of Yuan, the blind Princess Isra, a Smooth Skin, is raised to be a human sacrifice whose death will ensure her city’s vitality. In the desert outside Yuan, Gem, a mutant beast, fights to save his people, the Monstrous, from starvation. Neither dreams that together, they could return balance to both their worlds.
Isra wants to help the city’s Banished people, second-class citizens despised for possessing Monstrous traits. But after she enlists the aid of her prisoner, Gem, who has been captured while trying to steal Yuan’s enchanted roses, she begins to care for him, and to question everything she has been brought up to believe.
As secrets are revealed and Isra’s sight, which vanished during her childhood, returned, Isra will have to choose between duty to her people and the beast she has come to love.

So, I've had my eye on this book for a long time. And when I started seeing all these reviews praising how amazing it was I knew I had to get it and read it. Holy crap am I glad I did! I was a little afraid that it wouldn't be as good as I originally thought, because I had high expectations for it, but oh my god I was blown away!!!

First off the plot was amazing!!! It was captivating and even though it wasn't fast paced throughout the whole book it still somehow kept you on the edge of your set. It was just amazing!! And the whole system of the world was just so twisted that you can't even believe that people would except that. I also really appreciated how neither side was completely bad. There was bad elements and bad people on each side, but neither was bad to the core. I just really liked how the author did this.

The characters in this book where really great!! I loved some and others I hated because they where so evil and all of them where just really well written. It seemed like every single character had a lot of depth to them, even the side characters. This made them all just feel like real people. So when the deaths of certain people happened it just tore you up. I cried in so many scenes in this book.

I also really liked the character development in Isra throughout the whole book. Not so much Gem, because he was always a little compassionate toward the people he was suppose to hate, but the development in Isra was phenomenal!! She went from being a meek, rebellious girl who had opinions and hated being treated like a child, but never really forcefully spoke up for herself, to being a strong, don't-mess-with-me, look outside of the box Queen. It was amazing to read!! To bad it was wasted on her people, because everybody thought she was crazy.

Next up is the world building. So in somebodies review they said that the author did a great job of describing the world from a blind persons POV. And I didn't realize how right this person was. The author did a outstanding job with the world building from Isra's perspective. Even though she is blind we still get to see and feel the world. However, the author did this perfectly, because it wasn't over done where you didn't believe that she was really blind. We get to see the world, but at the same time still believing she is blind. I also really loved this world!!

The only complaint I have for this book is the fact that the romance felt a little rushed. Well, rushed isn't the right word, it's just I felt that the author skipped over something important to Gem's and Isra's relationship. We know that they spent months together in the garden building a friendship that is the foundation of their romance, but we never really got to read that part. The author just kind of skips that part and we finally see them together when they start realizing they love each other. I was just annoyed with this, because I really liked these two together and I wish that we got the full effect of their relationship.

Lastly I wanted to comment on how it felt like a fairy tale. Some fair tale re-telling don't actual feel like a fairy tale. They never really have this magical aspect sprinkled throughout the book. Which is fine since not having that doesn't take away from the book, but having it makes it seem just so much more....magical for the lack of a better word. This book had that and the perfect amount of it. It didn't have to much of that magical, fairy tale quality where you roll your eyes at the silliness. It had just enough for it to feel like a fairy tale. And I loved that. That is what made me love this book as much as I did.

Overall, I loved this!!! I loved it so much and it was refreshing to read a complete story in one book. I would recommend it to you if you are a romance fan, or a fantasy fan, or a contemporary fan, or a paranormal fan. Basically I would recommend this to you no matter what genre you prefer.