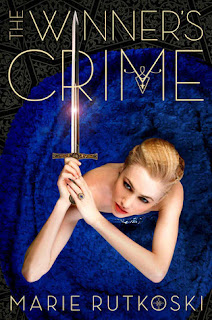 Book two of the dazzling Winner's Trilogy is a fight to the death as Kestrel risks betrayal of country for love.The engagement of Lady Kestrel to Valoria’s crown prince means one celebration after another. But to Kestrel it means living in a cage of her own making. As the wedding approaches, she aches to tell Arin the truth about her engagement... if she could only trust him. Yet can she even trust herself? For—unknown to Arin—Kestrel is becoming a skilled practitioner of deceit: an anonymous spy passing information to Herran, and close to uncovering a shocking secret.As Arin enlists dangerous allies in the struggle to keep his country’s freedom, he can’t fight the suspicion that Kestrel knows more than she shows. In the end, it might not be a dagger in the dark that cuts him open, but the truth. And when that happens, Kestrel and Arin learn just how much their crimes will cost them.

It is no secret that The Winner's Curse was one of my top reads of last year. So I was very excited for this book. I am so happy to say that I loved this book so much!! It was just as good as the first one!  I fell in love with the characters, the plot, and the writing all over again! This book was amazingly written, with such in-depth characters, and a plot that had me on the edge of my seat! There was just one aspect that annoyed me a little and this was how god damn frustrating Kestrel and Arin were.

This book starts off a little while after the events of the first book. Kestrel is in the capital trying to wade through the court politics and Arin is in Herran trying to govern. Things progress from there. The first thing I want to note is how glad I was that Arin and Kestrel meet again early on. At first, it seemed that their paths wouldn't cross and I'm so happy that this wasn't the case because Arin and Kestrel together are my new ship life. This whole series is about their romance, essentially this is their love story. So, I am really glad that their meeting again wasn't pointlessly put off.

As I just said, this whole series is focused on Kestrel and Arin. The plot is driven by the political intrigue and tensions but mainly focused on the love story between the two characters. I am totally fine with this because these characters have so much chemistry and they go together so well! Kestrel and Arin are just so well written and the longing they have for each other just leaps off the page making you feel all of their emotions as well! This book gives you such a rollercoaster of emotions and I loved every second of it!

The writing in this book was so wonderful! Marie Rutkoski has a talent for writing! The book was like an elegant poem. Even if everything about this book was horrible I would still read it because I just love her writing! It is just so enjoyable to read! This author can do everything, she can write amazing settings, develop outstanding characters, and create nail-biting stories!

This is the squeal and thus the second book in the series and it does have a tiny bit of a second book syndrome. In hindsight, after finishing the book, it does seem like a setup for the last book. This book focused a lot on the possibility of another war and how Arin and Kestrel's relationship was deteriorating. However, when reading this book I did not get this vibe at all. I was thoroughly enjoying reading this book and stayed up for to late finishing it! Marie Rutkoski somehow made a second book syndrome actually enjoyable. I am kinda shocked!

The only aspect of this book that I found very irritating was how Kestrel and Arin acted around each other. It was beyond annoying. Let me explain a bit because that sentence might have sounded a bit contradictory with all I just said about Kestrel and Arin. First off, Kestrel was bound and determined to keep Arin in the dark. She did not want him involved because she feared for his life, which makes sense. However, I wanted to throw the book at the wall when it got to the point that he was in more danger not knowing and she still insisted to push him away. She was creating more grief than was needed and I was getting so frustrated! And Arin! He was beyond irritating! He kept guessing all the right things about Kestrel but then pushing them to the side. He kept being like "I'm way to stupid for that to be right". It. Was. Annoying! I understood why the author wrote it this way. I am not mad at that at all, I am more just annoyed with the characters. In hindsight, this means that the author did an amazing job connecting me to the characters but it was still annoying to read!

This book was such an amazing book to read! I loved every second of reading it! The setting was great to read, because Rome, The characters were just so developed and in-depth, the plot was freaking fantastic, and the romance was heartbreakingly beautiful! My heart hurts after reading it because of my ship! Kestrel and Arin are my ship life and how their relationship was falling to pieces. I hated how much I loved reading it! I would recommend this series to everyone!

Recommended if you like: Fantasy, Love stories, The Remnant Chronicles by Mary. E. Pearson