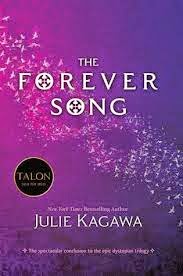 Vengeance will be hers.Allison Sekemoto once struggled with the question: human or monster? With the death of her love, Zeke, she has her answer.Monster.Allie will embrace her cold vampire side to hunt down and end Sarren, the psychopathic vampire who murdered Zeke. But the trail is bloody and long, and Sarren has left many surprises for Allie and her companions - her creator Kanin, and her blood brother, Jackal. The trail is leading straight to the one place they must protect at any cost - the last vampire-free zone on Earth, Eden. And Sarren has one final, brutal shock in store for Allie. In a ruined world where no life is sacred and former allies can turn on you in one heartbeat, Allie will face her darkest days. And if she succeeds, her triumph will be short-lived in the face of surviving forever alone.THE FINAL HUNT IS ON.

It is no secret that The Immortal Rules series is one of my all time favorites. I love how dark it is, the many themes of hope and humanity woven in, and the outstanding character depth. This series is just so well written and just plain good. So I had to read this final installment as soon as I possibly could. I read this one in a few days which considering how these are particularly fast reads is pretty impressive. This book was an amazing conclusion to a freaking brilliant series!

So this book starts a few weeks after the events in The Eternity Cure. The crew is hunting Sarren, each for their different reasons. Allie for revenge, Kanin for redemption, and Jackel probably because it seemed fun. Allie at the begging of this book is in a really dark place. Zeke is dead and she just doesn't care about anything except killing Sarren. She is ready to stop fighting to be good and let in to the monster. I really liked how the author highlighted the difference of being a monster and giving into the monster. Jackel often acts like a monster, however, he doesn't give in to the monster because that would be losing yourself to the monster, which is different then being a monster. That might not make sense unless you read it, but I am glad that the Author put that in here because I always thought that when reading this series and it was great to see it highlighted.

I really loved were this plot went! Besides being really addicting and gripping this plot went places I didn't think it would, which is always great for a book. There was some predictability to it, but that was more of a 'who might day' thing then a 'what was going to happen' thing. (This next part might sound weird because I'm not doing spoilers) I am also really glad the author didn't focus and carry on with a certain thing in the beginning of the book and made Allie realize something early on. I would have been a little annoyed if that aspect of the beginning went on longer then it did. With that being said I wish she focused and put more time in the thing with the character in Jackel's city the she did. I felt that was resolved way to quickly. However, the drama that that character gave afterwards made up for that fact.

The characters were great, as usual. I loved seeing Jackel progress as a character and get more human as this series goes on. His character was just brilliantly done. Allie goes through a lot in this one, which brings more depth to her character, which I hadn't thought possible, and made her grow so much. Kanin as a surprising amount of character depth for a guy who is that reclusive. That shouldn't be surprising since Julie Kagawa is amazing at writing characters.

Basically I loved everything about this book. It was a fantastic ending to this series. I loved every single minute of reading this one! It was just so beautifully written for a book that has as much blood and gore as this one had. The only thing that wasn't exactly amazing was the tone of the ending. It was such a shift from the tone of the rest of the book that, even though I liked the ending, threw me off a bit. But besides that this ending was amazing! This book wasn't constantly full of action, but those gabs were filled with drama, angst, horror, and themes of hope, surviving, and humanity.

I would recommend this book to anyone these books to anyone, even people who don't really like vampires. To them I would say try the first one out because it is amazing. However, be warned that these books aren't happy books; they are dark and filled with death and gore. So be warned about that but don't let it keep you from trying out these books.