My Holiday giveaway is still going: click HERE to go to and have a chance to win a paperback copy of Throne of Glass by Sarah J. Maas.


My other Holiday giveaway is still going on. Click HERE to go and have a chance at winning a paperback copy of the Darkest Minds by Alexandra Bracken.


I have a few challenges I am going to do in 2014, even though my 2013 challenges didn't do so well but we won't talk about that. So I'm going to show the ones I will be doing in 2014. There is only three so far, but if I find anymore I want to join I'll make another post for that. This post is a little long, but I thought it would be easier to do one big master post instead of three smaller posts.

The first one is one I did this year and it is the TBR Pile Reading Challenge. It is hosted by Bookish. To see all the rules for it click HERE.
Levels:
(how many books you're planning to read for this challenge in 2014)

I will be doing A Friendly Hug.
Books I want to read:
1. Such a Rush by Jennifer Echols
2. The Book Thief
3, Covet by Melissa Darnell
4. Override by Heather Anastasiu
5. Pandemonium by Lauren Oliver
6. Rapture by Lauren Kate
7. A Job from Hell by Jayde Scott
8. Soulbound by Heather Brewer
9.
10.
11.
I left some blank because I know I have a lot more in my TBR pile and I want to keep some open for options. 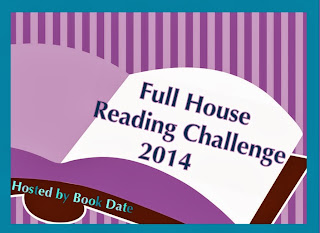 This one is a new one for me and it looks really fun. It is hosted by Book Date. You can see all the rules HERE.
This challenge is where you read and review a book for every square on the card below. Altogether if you complete the card would would of read 25 books. 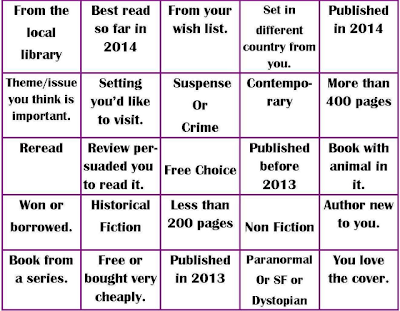 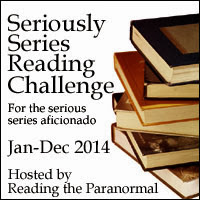 This is another new one for me and I am really glad I found it, because I have a lot of series I want to finish in 2014.  It is hosted by Reading the Paranormal. To see all the rules go HERE.
Here are some details.
"A series is considered complete in one of two ways: either as finishing all the books that you own in the series or as obtaining and reading all the books that have been published in the series to date."

"For this challenge, a series is defined as a collection of two or more books that belong together and where the second book is published before the end of 2014."

There is a lot of series I want to finish that I started before 2014. And I only put down series that have the last book published or will be published in 2014. I also didn't put any down for started in 2014 because I don't know which series I will start in 2014.

Those are the 2014 reading challenges. Are you doing any of these challenges? If not, what challenges are you doing?
Happy reading